Journey through the decades 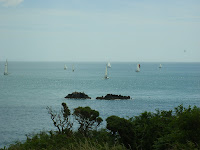 As a therapist I spend a lot of time explaining people's feelings to them, so that they can make sense of what is going on inside them. I do not set myself up as knowing more about them than they do themselves, it's just, I know we share commonalities between ourselves, and if I have felt it then others have to.

The majority of my clients are women in their late 30s and 40s and although their stories are all different, they have age related issues in common which once I've straightened out for them, usually has the affect of making them feel normal, rather than them questioning their sanity, which is where they had been going.

So I thought it might be useful to share my views of this process with you. If you are in your 50s then you can smile smugly. In your 20s and 30s then you can take precautions to not get stuck when it hits you. And if in your 40s and this makes sense to you of what you have been going through, then I hope this helps.....


When a child is born they are completely dependant on their carers, usually parents so I'll stick to that term even if the PC police think it's wrong!

The child, out of a need for survival puts their parents on a pedestal. Who hasn't either said or had said to them when I'm bigger I'm going to marry you and Daddy? This is about the child's need to love their parents unconditionally(however good or bad the parents are) because without the parents the child could not survive.

Then the child goes to school, Mummy and Daddy are still utterly vital, but at the same time the child when he/she goes to play with other children starts to observe there are other ways of being parented. As in little Johnnie's mum lets him play poker all night!

At the same time as this the process of separation from the parents begins, the child starts making alliances with their peer group. Again this causes a huge amount of pressure in that, to feel that the child belongs they want the same trainers as the rest of the gang, or to watch what ever programme/game that their contemporaries are.

Then the child enters the teenage zone, a complete mine field of mixed emotions, one minute a sophisticated adult, the next back to a five year old. They have to go through this bridge of behaviour to reach adulthood. So this is a time of rejection of parental standards, just because!

Once this horrendous phase starts to pass and there is no fixed age for this, but girls do come through it quicker normally, then the young adult starts to make their way in life. Whether higher education, job or careers, getting their first home together, starting more serious relationships and having children. This stage goes on from the late teenage years and into the late 20s for both sexes.

The 30s are the decade of consolidation. Climbing the career path, moving house into the forever home, raising the children. And quite often in this decade the women start to disappear. I know when I look back at pictures of myself in my 30s I look younger now than I did then, and I'm certainly fitter now.

Then we hit our 40s, and I call this the lost decade. Suddenly the woman has gone from being her parent's daughter, to her husband's wife, to her children's mother. She gets to 40 something and she doesn't know who she is anymore, she has lost herself along the way. What women generally do is start to expand their horizons, which is why universities are jam packed with 40 something women studying.

Men are also going their own crisis of identity and are asking themselves is this all there is in there lives. But because men have generally had the career,as opposed to 'the little job' the woman has had,so they don't want to any more education. They and again this is a generalisation start to want to find the magic fairy dust of a sexual encounter. They may still love their partners, but sex may be like wearing a comfy pair of old slippers with their long term partner, and they are yearning for the excitement of a pair of stilettos!

Now of course either sex can do either thing I am suggesting, the men have got to be having affairs with someone and they are not all 20 year olds surely!. Some couples don't go through this in the way I've described, but they will go through something, but they may do it together. If they do then they stand a chance of making it as a couple into old age.

At the same time as this is happening for women they are also starting to be pre-menopausal. And this is very akin to the bridge time they went through in puberty. Except that they are coming to the end of their reproductive lives and have to make it to relative calm of life beyond the menopause.

This can mean that women do not know which end is up for a while. They can't remember things, their bodies are changing, sleep is disturbed, hot flushes can become normal. And worst of all they can go through a stage of self hate that no-one has told them will happen. In exactly the same way as adolescent girls can hate themselves.

All of these can happen one on top of the other, as well as the woman's own parents ageing and becoming more dependant. So she is losing her role of useful and wanted mother, her libido may not be what it was, she just feels lost and more useless than at any other time in her life.

The good news is, as in puberty, this stage is not constant,it passes. And it passes in different ways for all of us. Then what does happen is when it has passed women become more confident about their place in the world. They are less likely to put up with others behaviour, in effect they become grumpy old women! Or put in a nicer way we become wise women or crones.

And again no-one tells us, but we become at peace with ourselves.

So the journey of life is one of acute dependence, with selfishness as a matter of survival. Self centeredness as we change from child to adult. Selfless as we care for our families, lost when we are in that no-mans land of the menopause. Resulting in self as being important.

Now at the moment I don't know what happens in the rest of the journey as I've not got there yet. But my friends who are in their 60s are basically having the time of their lives. As finally it is there time to do what they want, be who they want and be okay with all of it.... I can't wait!
Posted by Fire Byrd at 16:57

Yikes, where am I in all of this...first off, I think my 20's were my early teens, 30's can't remember,40's still can't remember, and now ...well hot flashes and insomnia are still with me 6 years later but yeah I think I've finally started to become an adult...and more so this last year...To say I wish i would have been like this in late teens and 20's is an understatement but better late than never eh Mandy...Now I would just love to travel more, enjoy new things and start making some decent money of my own...

What a wonderful enlightening and very truthful post, thanks for hitting the nail on the head, you could have saved me a fortune when I hit 40...lol...x

that was a brilliant post! I guess I escaped the normal pattern by having a baby at 45 when my nest was about to empty. I do admit to feeling a grumpy old bat at times occasionally though, but I guess I'm entitled!

Just one small point the rejection of teenagers of their parents values isn't 'just because' it has a very importance function in them differentiating from their parents and their values in order for them to become their own person and not a carbon copy of the parents.Questioning the values of others is a vital and healthy stage.
Re the 60's..you bet, they're fantastic!It's when we get to be grumpy about the values of others!Plus all the wonderful bonuses of retirement.

I think I'll just smile and nod a lot.

Being 57 I'm not all that far off from 60 Fire Byrd and really can't think that far ahead yet, ha ha ha.
I embrace who I am today, warts, foibles and all and now I need to go ponder just what it is that the age of '60' has in store.
Great Post Dear! :)
xxxooo

Life in a nutshell. How cool is that! My forties were actually better than the 30's which were just a replay of my repressed teenage years. I shudder to even think of those days.

Life in a nutshell. How cool is that! My forties were actually better than the 30's which were just a replay of my repressed teenage years. I shudder to even think of those days.

Thank God we made it through; we can laugh at ourselves now, enjoy without guilt;stand up to our children as well. We are glad they are grown and out of the house and on their own. We wish them well.

We are finally in possession of enough time to do all the things we never had time to do.

Woman you share so much!
I am constantly just moved by your ability to cross borders and boundaries to reach out and make a difference in the lives of so many people!
You and amazing!
((((((mandy))))))

Yeah, arent we all amazing in making it through those years? All smiles here. I am so much looking forward to my fifties and more. HUgs to you.

Thanks Byrd.Big hug.That lost no man's land is a doozy. Girlfriend and I still laugh about tearful phone calls at the time, wondering how we got through it but we did! I have been wondering about the approaching 60's, 'cause I certainly feel a lot better. Your post is reassuring.

Great post - I know where I am at 58 - pity the rest of the world don't!!! Only joking, mostly happy where I am - just now and again wish I was better at explaining to others my needs and concerns.

Interesting, but I don't fit the stereotype as we got married late.

I think you should give this to all new babies when they are born as well as a copy to their parents.

i can relate to nearly all of it ;) xoxo

This is a very interesting post. How true everything is about each stage. I'm definitely looking forward to a very new, very different stage.

Oh! I really wish you were closer, I need you as MY therapist!

There is so much truth here! I've done things in a slightly different order, having a fabulous career before having children. So, at 53, I'm still waiting for my 19-year old son to grow up completely and cooperate.

I find that people who have known me for decades are a bit resentful now, when I insist on making some changes in my life and being more honest about who I really am. But they'll just have to get used to it. I don't put up with much garbage anymore.
:0)
I'm really looking forward to the rest of my 50s, my 60s and the rest of my life.
xo