NOT A GOOD WAY TO END A BIRTHDAY, PERHAPS??? 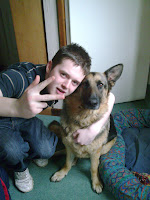 This is my youngest son on his 18th birthday with his best mate!!!!!

So your youngest son gets to be 18 on Friday 13th. All is going well. Presents have been given, time with mum spent, and off he goes out drinking with his mates.

Now he is not a stranger to drinking despite it only being legal for the first time today. He has been going out and drinking since he was 15.

Which if your British won't be so shocking and if American ... very.

I remember my father telling me the story of when he reached 18 and telling the landlady that he was 18 and therefore legal, she throw him out of the pub, as he'd been a regular for the previous two years.

I started drinking when I was 16, not that I liked it much, took to my 40th birthday for me to appreciate the taste of gin and tonic. Nowadays I only drink Bombay Sapphire when I drink gin. And really other than Champagne, which I adore you can keep booze.

But I digress, one of youngest's mates in his infinite wisdom decides that the very thing Al needs is 10 shots for his birthday. By this time Alex has been drinking a mixture of beer and Sambucca all evening ( not in the same glass I hasten to add!!!!!)

The shots are a mixture of alcohols, Al says he can't drink 10 shots, so they are all put in one glass and he necks it.

This is when life goes wrong for my baby!!!

He decides that someone has been staring at him, he goes outside the club he is in, and punches the person in the face. Now it would have been okay if he hadn't done it in full view of the Police!!!! They had no choice but to arrest him.

So my little angel spends his birthday night in the cells sleeping off the affects of the alcohol. He managed to phone me on his way to the police station to alert me to what had happened, and before he was put in the cell he phoned me again.

He didn't know which police station he was in. I managed to locate him this morning only to be told there was absolutely no point in going down there. As once he'd been interviewed he'd be let out.

He arrived home at midday in a police car. He had a shower and then went straight out to watch the match (only one that counted round here today, Liverpool v Manchester!! and Al has been a Liverpool supporter always)

But this evening he has spent three hours with his aunt and uncle and me, coping with us taking the piss out of him for his antics.

Now of course on one level these have just added to his street cred. But Al is not so stupid to know that actually this is not the way he wants to run his life. And that if he hadn't been so inebriated it would never have happened. Or rather he'd have noticed the presence of the police and acted accordingly perhaps!!!

But whatever, he has been able to talk about his experience openly and what his feelings outside of the bravado are, so although it was a terrible way to end his 18th birthday, it was also a salutatory lesson for him, which he appreciates..... if only cause the food was so bad in the nick!!!

Labels: not a good way to end a birthday

I`m voting every day (if I get to the computer) and will again tomorrow! As to your son...why do these boys ever think it is cool to get drunk I have always wondered. Will they learn? Let`s hope so.
Never mind telling us, Mandy. We all know how it is to bring up children, and congratulations to both of you!

As for Al, it's all part of life's learning curve, I feel sure he will have learnt from it...xx

Darn... I've not always remembered to vote each time I stop by... that's what happens when one gets old.
Now Alex, surprised he isn't retching over the john again after all that booze. Well, if he didn't have a particularly happy birthday at least he had a memorable one! :-)

Oh please,
Just please...
shaking head..
Love them boys of ours
but some days there is not a stick in the world big enough to beat some bloody sense into them
ugh
sigh
(love ya lady)
going to vote...
taaaaa...

Ah Byrd! Join the throng of parents shaking their heads in disbelief. Our tales are many and varied - some regurgitated at family occassions - and adding to the book called "family history".He's here to tell the tale, which is good.My daughter at 16 was heard on the phone telling friends "and my Dad will supply all the booze for us". As he was a teacher at their school at the time, we were both horrified and mystified at this information which was news to us, and being broadcast to all and sundry! Turned out that she said she had asked him would he do this, and he concentrating on something else had merely muttered sarcastically "Yeah,RIGHT", as in "in your dreams", in reply.She had a few phone calls after our gasps, to re-clarify.Off to vote - least I can do!xx

oh ugh - what is it with the shooters? happy birthday to Alex and you. hope the rest of his year is shooter free :-)
am voting madly - you have to get there!!

Ah well--happy birthday to the son!
One turns 18 only once. (thank GOODNESS!)

Yep, still voting. I think I did do last night too, returning home after my own alcohol consumption.

It sounds utterly absurd, but I gave up drinking for a year or two at the age of 18, which makes me sound like some kind of teenage alcy...

But yes, hopefully he won't try anything like this again (10 shots....shakes head) - let's face it, he could have had a lot worse to deal with than family members taking the piss...

Oh yes, and happy birthday to him all the same:)

Voted. Sounds like Al has had quite a lot of experiences for his 18 years of life!

Oh my, how time flies. I thought I had signed up to follow your blog, and surprised not to get an automatic update, I came to find out that you are there right where I found you the first time. Good for me.

I see our friends Angela and Lizzy/
Cheryl have dropped in, You'll be seeing me.

And I will vote, too.

voting faithfully, still! Poor Al..what a way to spend his birthday!! Although feeling terribly sorry for him, I did smile at your telling of the tale! I can relate to this so well! x

Unfortunately, it isn't only boys up to these antics. Your young man is very lucky, and hopefully smart enough to realise it. That is a milestone birthday in more ways than one...

I've been voting daily and will go again now. Regards to Al and your lovely dog. I hope you win!

I blame it on the full moon over the weekend. Well, SOMETHING must of been in the air for all this fighting in your and my world!!!

Myself and every mother of young men I know has had a similar experience, they will let you down, hopefully just once :-)