A STORY FOR CHRISTMAS 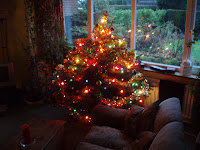 Last Christmas I tried my hand at writing short stories here. I'd written a few blue ones but wanted to see if I could do a suitable one for the season. So this year I thought I'd have another go as I so enjoyed doing it last year. So here goes, don't know how long this will be or what will happen as I only have the opening line in my head. But if you can be bothered this is it.

She woke up, stretched and smiled remembering the last few dying moments of her dream. Then reality set in, her smile disappeared and those lovely thoughts slid out of the window just as fast.

It was coming up to Christmas, she hadn't got the time to be lying in bed, there was so much to be done that she hadn't yet achieved. But it was so difficult this year. In years gone by she would have been so organised weeks before.

The only thing she'd done this year was to have got the tree. That made her smile,however bad it was she could still capture the childhood magic of the twinkling lights, baubles and tinsel. The hope and excitement of decorating it. She'd got very fussy about how the tree should be decorated and it was still true today that the order had to be followed. Everyone had always commented on her trees.They looked the way trees should. And they were always real, even though now it was a bit of a ridiculous expense nowadays, it gave her pleasure. And that was surely in short supply this year.

Getting out of bed, she made her way downstairs and put the kettle on, but instead of taking it back to bed she went into the living room. If she was lucky there would be some embers she could poke into life in the fire. She'd worry later about cleaning out the ashes. Her luck was in the fire lit, so sticking a couple of logs on the fire she sat down to enjoy it's warmth on this chilly morning.

She went to turn the lights on the tree, so she could stare at it for a moment or two, in the hope that the sight would inspire her to get motivated to do her chores. The tree worked it's magic and she became more peaceful than of late. So gathering herself up she went upstairs to dress and get ready to tackle the tasks ahead.

With this new found sense of peace, she decided to go out into the village and have a coffee and cake for breakfast as her normal bowl of cereals did not appeal somehow. And it was nearly Christmas she whispered to herself as she let herself out of the door.

But before this treat she must get her shopping, so visiting the bakery, the green grocer and all the other places to pick up her daily requirements she soon had a full basket, and she made her way to the coffee shop.

The smell was lovely of fresh ground coffee and pastries. She chose to have a home made mince pie, after all it was the right time of year.

Sitting down in her favourite spot in the window she allowed herself to watch the passers by and do what she always did and imagine what sort of lives they all had.... There was the man , who she felt sure had been in the services he carried himself so well,he had a quiet dignity about him. There was her favourite young mum with her baby going past, chatting to each other and smiling and talking lovely nonsensical baby talk together. Then her friend came into view, she tapped on the glass and waved indicating the coffee. Her friend mimed back that she was going to the bank and would be back in five.

Oh she was relieved, although she normally loved people watching this was a difficult time of year to do it when she was on her own. She knew that the tears of loneliness weren't too far under the surface, and now she could push them away whilst she had a natter with her friend.

Later, letting herself into her little cottage, it was all she could do to empty her shopping basket and put things away. The isolation that she felt just overwhelmed her. What was she going to do. How was she going to cope with this ordeal.

Never before in her life had she felt Christmas to be an ordeal, even in the difficult years after her husband died the children had been around, but now they were far away, one of them with his wife and new baby, so she understood that they couldn't get down to see her. And she knew that her daughter in law had her mum staying with her so she wasn't needed.

As for her eldest he was abroad, and had been for several months now with his job.And although he emailed and phoned her lots it wasn't the same as seeing him.

This wasn't doing any good at all, she couldn't give in to this behaviour, after all she had a lovely little home, she had her cat to talk to. She had enough money for her needs all in all she was just being silly.

Suddenly and almost imperceptibly she could hear Christmas music coming from somewhere, it seemed to be getting louder, getting up she went to the window, and outside was a large horse drawn sleigh blaring out carols. Father Christmas was on the sleigh, she smiled delighted and rushed to the door with her purse. She knew it was the local charity group collecting but for her the simple pleasure of seeing Santa made her happy.

People were in costumes of fairies and elves going up to every ones front door with their collecting buckets.She was delighted to give what she could.

It had really brightened her up, yes she was alone but that didn't mean she had to be miserable. She didn't register the phone ringing for a moment lost in her reverie. But the persistent ringing finally got through and she rushed to answer it before the answer phone clicked in.

It was her youngest son, what a lovely surprise. He wanted to tell her again about his wonderful new baby. His excitement at becoming a father was infectious. He wanted her to go and visit,could she come up on the 27th and stay for a week with them.

This took her breath away at the thought of him , well both of them, wanting her to go and visit. This was going to make Christmas totally different after all.

She went back into the living room smiling and thinking about how this was turning into a red letter day after all, and that it couldn't get any better.

Later that evening with the curtains closed against the chill she sat with the cat on her knee enjoying the firelight and the twinkling lights sparkling on the tree, when the door bell rang.

She wasn't expecting anyone, but maybe it was some carol singers, she got to the door and she could hear one voice singing we wish you a Merry Christmas, it had to be said the voice was a little out of tune. Opening the door, she realised why it was out of tune as there in front of her stood her eldest son smiling down at her.

Hello Mum, he said as she just stared at him speechlessly as the tears started to pour down her face, and he enfolded her in a huge hug.

It was just going to be the best Christmas ever after all.
Posted by Fire Byrd at 17:44

Aw Byrd that's so lovely and very well written, thanks for sharing..xx

Yep, like Rae!xx says, very nice to read. I love the bit about people watching too, very evocative.

Aw, what a lovely and poignant story, FireByrd. You really carried the reader with you so beautifully, through all her hopes and dreams and fears.

hey i love the story - i totally get the magic of a tree with sparkly lights and baubles and all. even though ol humbug here isn't putting one up this year (although the darling has other ideas if he weren't so busy at work)

and you won't believe, speaking of dreams what i dreamt last night - that i was tony blair's adviser on his pending trip to france to meet the presidential couple - haha. what was *that* all about!!!

and i also get how a day started with sligh trepidation could turn into a red letter one.

LOvely, Fire Byrd! Yes, it made me think again of how important a "real hug" is to us. We do need people and the feeling to be loved! And so my solution for her would have been - in case her sons could not have made it - to go out and find somebody to hug and sing with, and if it were in a hospital or a homeless center or a church community. There are just so many lonesome souls, especially at this time of year (you described it so well). If you have the time and no one needs you at home - try this out! I promise you it will make you happy!

what a lovely heartwarming story... :-)

Mei sent me and I can hardly see to type as I am blinded by tears. That really touched a nerve. I hope if I am left alone I can be such a gutsy survivor.
Thank you for that:)

What a feelgood story, firebyrd. I've been catching up. I'm so glad you enjoyed your black tie do and hope it's the first of many to come. I loved your NYC pix too.

Lovely. Got here via Absoute. Good to find another writer

Beautiful. The way your story flows from moment to moment.

"Hello Mum". It was her oldest son...awww, that gave me a lump in the throat.Can relate to her age-group. A sensitive and lovely story. Thanks for visiting me and leaving a comment.

Thank you all for your kind and generous comments about my story.
I really enjoyed writing it. Like all of my stories there are elements of my life in them, but it was a work of fiction. Or possibly how life could become.
But it is my intention that when I get to that place I will be serving lunch in the homeless shelter and giving something back.
Peace and blessings
xxxxxxxxxxxxx

Great story and I bet your Christmas will be just as wonderful if not better :)

You did very well. I really enjoyed the story. Your style reminds me of Maeve Binchey.