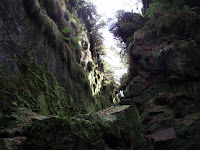 I've just had one of those evenings that are such fun that you don't want them to end. And it's only the whole having to go to work the next morning and therefore needing sleep that makes it end.

I've been out with the spectacularly gorgeous Queen Vixen, we met halfway between our homes in a place conveniently called the Bridge!

And we started.... gossiping,laughing, eating, sharing, reading Tarot cards, drinking, but not much! (It is a pain not being able to have more than one glass of wine.) And generally enjoying each other's company.

Since she got her new job and all the other commitments that she is currently dealing with, we don't get to see each other as often as we would both like. So at the moment we are going for quality rather than quantity!

We have spent the evening being really naughty together in our own various ways!!!
I'll leave that to your imaginations as to what that could mean.

One thing that QV picked up on was my empowered behaviour. I hadn't realised but I'm doing a lot of sorting out of my relationships, and cutting out ones that are not working for me.

As in,the girlfriend who sent me a text on Saturday suggesting we should get together for a catch up. This left me in a real dilemma, as a catch up means that I get bled dry and she gives nothing of herself away. We used to be very close friends pre cancer. I listened to her and was there for her 24/7.Then on getting ill, she wasn't around, her excuse was that I had gone through so much that I didn't need her ..... Right that made sense... NOT. The upshot of this was that our relationship has struggled on for the last couple of years, as she has said less and less to me about anything meaningful.

And I have had it with meaningless relationships, so I sent her a text telling her so. She sent me one back saying that she must have been a terrible friend to get such a horrid text. It wasn't horrid it was straight and honest, possibly a bit blunt. It was time for me to stop playing the friend game with someone who wasn't my friend and all we had in common was history.

So that felt better to me, there was no longer any ambiguity, just my truth and her need for me to confess my sins as a nasty person... dream on Helen.

This set QV and me up for the evening, when out of the blue an ex boyfriend, I'll call him Pete, since that was his name, turned up in the wine bar. I haven't seen him for two years. To begin with I was a complete dither trying to talk to him and QV. She on the other hand was giving him the evil eye to disappear, which thankfully worked. Till he saw us doing Tarot cards, when he returned and asked me to read his.... What, he thinks he could have that sort of intimacy with me... Pah!
But I did them, again feeling powerless. When I'd read them, deep from within me came the words..... 'now bugger off and I'll see you in another two years'

I felt liberated and in control of myself, by which time QV was falling around laughing at my behaviour. And then I confessed that I'd also recently written to an ex lover, who'd started texting me again for who knows what reasons. I'd written to thank him for supporting me at a very vulnerable time earlier this year. And I ended my email after thanking by telling him I thought he was a wanker.

QV was nearly off the seat by now, poor girl needed an extra gin to steady her!!!

What a hoot, I think the message is -Just don't mess with me, cause I'm not putting up with it anymore. I am a very loyal and loving friend and/ or lover, but I've done with unequal relationships big time.

I will give you as much love as I can, and more besides, but I will not be played.

I, according to my Tarot reading am strong and on a new journey of self discovery, that is far more spiritual than before. This feels right to me, as that is what i have been thinking about myself for some time.

So if you want to walk beside me for some of the way, you are really welcome for as long as we walk side by side, dealing with all the topics under the sun from life and death ,to which washing powder is best. Just as long as the conversation is balanced between all subjects and not exclusively one or the other. As if it's the former, then that comes under the heading of work, and if the latter then I'll have to shoot you!!!
Posted by Fire Byrd at 22:41

Labels: get tough be strong don't mess and walk side by side

Hi, darling. Surfacing for air, deep breath, loved your post. What fun I've been missing with you. Wish I'd been there to enjoy your heights.

Will talk to you in a day or two when our continent's synchronize a bit.

Love you to bits.

Now see i am rolling about laughing!
Wishing I was QV, and getting to soak up some of your splendid company!
I am toasting you love!
my wine glass is in the air..Slainte!
and hugs!

Exactly! I think this comes with growing older - suddenly realizing what is important in life, and especially who! I have done that, too, meeting with an old friend and telling her we had nothing more in common. It was sad (but more for her) because it also had become a VERY one-sided affair, as you mentioned yours to have been. And so, for the sake of your own health and balance, get rid of "weight" that only pulls you down. Surround yourself with people who are as thoughtful as yourself! Cheers from here!

that's one great night out! you had me in stitches too.

but so totally get you on being clear to yourself who your real friends are. i tend to take the coward;s
way out and just not get back to invites out which make me think twice.

Oh, how I would have like to have been a mouse in the corner!

Strange I have been thinking about a friend that never return my calls all day. Your post makes me wonder if she is worth the heartache.

laughing my socks off at you telling Pete to bugger off and t'other that hes what he is.

Sorry for not being such a great friend recently, had stuff to work out and felt I had already burdened you enough. But I'm coming back to myself again now :-)

We had a riot - roll on the next time. Plus the two parties! Can I tell the next ex to bugger off? Please please. You were great!

When I'd read them, deep from within me came the words..... 'now bugger off and I'll see you in another two years'

BRAVO!, girl! Yes!, I love that you are telling emotional vampires to fuck off! I would've liked to have been there to see that power in person.

Good for you for getting rid of the selfish friend. People like that make me so angry--they're there for a good time but never around when you're truly in need.

I had a nice evening like that not too long ago, although I didn't have to work the next day so I was able to stay out until four in the morning.