WE GET THE KIDS WE DESERVE???? 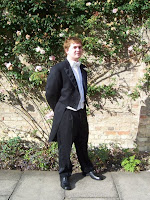 I've had to put this wonderful pic of my big son up, well it's wonderful in my eyes! Cause tomorrow he's 23 yrs old, So Happy Birthday him! Plus he's now got a place to live in London, so he will be leaving home again in 10 days.

I've been working hard in the last few weeks that he's been around, not to think of it, as him having moved back. I've maintained he's just on holiday in my head. Cause if I'd gone anywhere else then the empty nest stuff will be getting me on the 30th!

Whilst he's been at home, we have been doing a fair bit of talking about our futures and how we are going to support ourselves/and/or each other. Which has been lovely as he has such a generous attitude to looking after me. Even though I do not expect or want him to, unless I fall on hard times at any rate. But it has made me appreciate how caring and loving he is towards me.

I am very proud of both of my sons, for who they are as people (even the youngest with attitude!!) They both display a compassion and understanding way beyond their years and they always have done.

And nowadays I can own that they may well have inherited that, but also they have it cause of the way I've brought them up. Saying this echoes my being able to own that I am ok and worthy as a person. And false modesty isn't going to get me anywhere!!!

In the bigger picture , however, I do think kids are getting a rough deal of it. This morning they were talking on the radio, about how the number of parents who make the time to sit with their children and read aloud to them has shrunk considerably from when my boys were little.

Which I think is really sad, it was one of the best bits of the day when they were snuggly in their PJs and sitting cuddled up either on the sofa or with them snuggled down the bed with me sitting on it reading aloud to them before they went to sleep.

Fewer and fewer children get to sit as a family round a table with their parents to eat their meals. It is a loved tradition in this house to eat together, it has always been the time of day for talking over the days events. And Sunday lunch is just the best bit of the week. I love the whole deal from preparing the food, eating it and clearing it away together afterwards. Although now having the dishwasher is a bonus for all!!

Of course it could be argued that my children have had a privileged existence. I would agree that they have been brought up in a middle class lifestyle. But I have brought them up on my own since they were 9 and 3. They have no grandparents alive that have taken any interest in them. They have only one Auntie who has bothered with them, even though they have three on their father's side. They haven't seen their father, except once for 4 hours, in the last 11 years. And the eldest went to Cambridge because he's really clever

There was another programme on the radio today, about how many children and young people are suffering from mental health issues. And how completely useless nationwide services are. Obviously there are pockets of outstanding care all over the place. But generally the provision is abysmal, particularly for anyone between the age of 16 and 20..

There needs to be a specialist service set up by the government that allows access to this age group to non threatening and useful care. One in which their special needs because of the age group is taken into account.

Admittedly these things are on the increase in the whole population, as our society struggles more and more in today's world.

But if we as a society want to decrease the mental health budget in this country then we need to move massively into preventative care. And not leave it till the problems become entrenched and subsequently more difficult to deal with as people become ever more stuck in their mental health problems

There is so much talk every time exam results are published about how the exams are getting easier than in whomever's day. They haven't they are just different. It doesn't equip anyone in today's society to know when the Battle of Hastings was (1066!) or even where the Battle of Hastings took place (which was at a place called Battle a few miles away from Hastings!)

What matters is that these young people can cope with the pressures that society puts on them, whether that's how to be effective in ICT, or English/Maths or in my opinion how to learn to communicate effectively about how they feel.

Surely the day of the British stiff upper lip is and should be over. There is nothing useful about being proud of not dealing with our feelings. And if we teach kids to communicate at a young enough age and not be ashamed of having their feelings then we are making a step in the right direction.

Ultimately it will put me out of work.... but that if it means that people are not suffering with mental distress it is surely a good thing.

No wonder there is a gang culture, all kids need to belong, and if the parents don't provide that, then their mates will. And we get the society we deserve.
Posted by Fire Byrd at 19:08

Labels: do we get the kids we deserve

alas i'm not sure my 18 year old son wants to be part of his mother's circle, which i think is all part of nature's plan for young men to strike out on their own, so i'm not too fretful, but i do worry about him ...

Just visiting via Monkeys on the Roof. A thoughtful post and I agree entirely.It has been delightful reading back through your previous posts, and I will certainly look forward to popping in again.

Happy Birthday to the kiddo!

And I won't mind being unemployed one iota!
Oh, what a treat that would be.....

Firebyd, so much of what you have written has echoes of my own situation - bringing children up alone, always reading to them and sitting at table together and, not least, aknowledging that they are clever and being proud of it!

Yes, effective communication is vital for young people, indeed all people. I'm glad that my daughter and 3 sons are all able to communicate well with me and with each other.

Best wishes to you and your boys! xx

Mei, theyare angels and devils combined when they are teenagers I think!

Pam, welcome, lovely to meeet you.

Mel, you'd get boreed very fast if you had nothing to do!!!

Braden, welcome, and thank you for sharing with me.It's good to acknowledge some time just how much we've helped our children accomplish

Thought-provoking stuff, Firebyrd. I'd never really thought about getting the kids we deserve (although obviously innate nature must play about). I feel immensely proud of my son - although he's only ten, and I guess it could go pear-shaped at any moment - I can't imagine it's all down to me, but I guess, having only the one, I do tend to spend a lot of time talking - and listening - to him. Sounds as though you have sons to be proud of. I can't imagine it will be easy to let him go, but it's an important rite of passage.

Oops - should read "must play a part". Must concentrate!

Happy birthday to your son today! Just to pick up on the government and lack of support for 16-20 year olds with mental health issues - as a member of the National Autistic Society, we are constantly campaigning for support and society acceptance. But, as you so rightly point out, our useless government do nothing to help because it usually boils down to money. And of course, they have more important things to spend it on like Olympic Logos.

Sorry, just got off my soapbox!!

...insightful stuff, Firebyrd...things are very much the same here in "the colonies"...i encounter thoughtful, caring young people in the course of my work in the music business and it gives me hope that there are still great parents such as yourself out there, giving your nippers the love and guidance they need...good onya!

LBD, your right it is important to let them go.... but it doesn't have hurt!

CJ, let me join you on your soapbox I agree with you!

Soul Pumpkin, welcome it's good to meet you. And all I do is my best and hope that is good enough.

Great post, happy birthday to your son and hope its easy for you to keep in touch when he's in town.
Agree with you right down the line.
My youngest just launched an art blog for his drawings if you'd like a look - links on mine.

That's a good looking lad and I think he is the way he is because of the way he was raised.
Morals you learn at home society is the testing ground for what you taught them.
I think the biggest problem with our kids and society today is technology.
Its robbed the family of its members and has taught it something difrferent than what parents would teach their kids.