The now of now 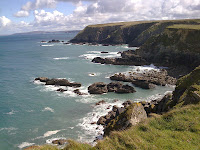 HAPPY NEW YEAR!
So I'm starting the new year with a clean house.... yeah
With all the decorations except the tree put away, I've given in till Monday on that, even though the poor tree is so droopy now. Courtesy of having to have the heating turned up when the pipes froze!
With my three new CDs put on the computer and the Beatles album Love playing and playing, when I'm not listening to Duffy at any rate.
Me singing all the songs on the Beatles album at the top of my voice, which isn't very loud as it makes me cough still!
With pictures of the sea to inspire me for going away in this new and potentially exciting New Year.
Don't know how it will be exciting yet, as there are no firm plans lined up, but there is belief that there will be plans and that is enough for today.
An optimistic belief that the world is a good place, however unrealistic that one is. But then I've always been a glass half full person, and nowadays I just have the glass as full, with days when the contents get spilled before it's refilled.
This being the first day for a while that I haven't been so exhausted that I've had to have a sleep in the middle of the afternoon, I'm here instead!
A day for being happy for the clear head, unlike the youngest and his girlfriend who are still groaning about their hangovers.... Oooh a small gloat going on here!
The belief that I can and will make some more work for myself this year so I don't worry so much about money, cause it wastes my energy worrying.
The power of living in the moment governing as much of my life as I can, giving me a sense of equilibrium that is unsurpassed.
And finally the main driving force of my life.... LOVE, cause it's all you need!
Posted by Fire Byrd at 15:07

Labels: mindfulness beatles new year all you need is love

Here to hoping 2011 has some positive changes for you and you get rid of this awful coughy, virusey thing you have been suffering with.. nothing better than smelling that rich ozone coming off the sea in winter.. makes you glad to be alive.. happy MMXI

Happy New Year, Mandy! I believe it was Einstein who once said, "Worry is but rust on the brain" and I always remind myself of that because I'm a worrier by nature. :)

I hope 2011 is chock full of purely beautiful moments for you!

Happy New Year Mandy .... I was sensible too - no hangover! My holiday decorations must stay put a while longer ~ youngest son from MN is coming mid-January for a week. I want him to experience a bit of Mom's Christmas. Then, they can come down.

and here is to another year of our friendship - supporting each other through those dark nights.. and celebrating our journey
do not give up on blogging - ever.. well until you cannot type or remember how to :) xo

A Very Happy New Year to you from both of us on this side of the Atlantic. Miss that I can not give you a hug!

Happy new Year and may it be filled with goodies for you ...health, happiness, love, joy ....and many giggles!
Thank you for your blog, for visiting mine and for Beautiful World ...because it is a beautiful world. .

okay, you have inspired me to get off my comfy couch, put some Pandora Music on (starting with some Duffy as I too enjoy her style)and tear down the Christmas clutter. I had reasoned waiting & let the girls help. But one is recovering from a hangover & the other decided to stay another day at her college town where she rang in the New Year. If I wait for their help it will stay up too long.
Maybe some hot tea as well to warm me up.
Love to you and have a Blessed 2011

I hope that your year ahead is wonderful, and I'm glad you're feeling a bit better.

Happy New Year Mandy. Neighbours (and their little children !!) next door partied wildly and loudly til 3.30 a.m. - the little ones, supervised by the inebriated, letting off fireworks at 2.a.m. Hard not to be smug about a lack of hangover,but I decidedly have the look of the sleep-deprived!
Wishing you,your loved ones and not forgetting Trix, a wonderful New Year full of good things,good health and happiness and thanks for your always interesting posts. I look forward to many more.
Love the photo you've featured - would love to be on that windswept British coast!xxx

Happy New Year! So glad to hear you're starting to feel better. Wishing you Lots of health, happiness, love and laughter for 2011 BG Xx

Glad you are feeling much better! Wishing you a most marvellous 2011!!

This is the first holiday season I haven't had problems with my Asthma, Bronchitis, etc. - not sure why... I did leave an 8 yr. abusive marriage in Sept. - could that be it? Could it be the peace? Could it be the rest? Worry? Any way, I have always loved the holidays but even more so this year. Not once did I feel lonely - even when I was alone. Your messages have struck so many notes in my heart and I can't thank you enough. I'm listening again. I'm letting go. Your blog has messages that say so very much, I wonder.. do you know? Jennifer

The sea is calling me too, I long to be by it which is strange really as it is the middle of Winter.
I loved your post, it was so optimistic and I am glad you are feeling better.
And you are right
All You Need is Love...