Another week, but I don't want any more like this 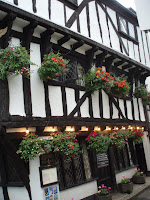 Sometimes I don't know how I stay standing, given the hurricane like wind of stress I have to deal with.

For the last couple of months a court case has been hanging over my youngest son. So I had to make provision to see as many friends as possible just in case before he went there this week.

I was barely back from Philly when I went off again down for a wonderful if crammed weekend in Devon, packing in three lots of friends. Seeing them included, lunch in Somerset. A boat ride in the pouring rain from Dartmouth castle to Dartmouth for lunch in the Cherub, of crab sandwiches and scrumpy cider the next day. Then over to the third lot of friends for a night out at a burlesque bar, for which we all had to dress up. Saturday say me watching the Bovey Tracey carnival parade in between glass of champagne. Which definitely made the whole thing more amusing than it would have been otherwise.Sunday was as ever, the best way to spend Sunday in the world, followed by my driving home in the evening.

So none of that was stressful, so what was the problem...... Well on Friday youngest phones me up with the news the dog's not well. We recently found out she has an allergy to beef which affects her ears and they were hurting her again. Okay that could wait till Monday

Saturday, the next phone call was that the youngest's laptop was broken, the hardrive had packed in, okay Monday would sort that out too.

Arriving home at 9.00pm Sunday, by the time I'd sorted myself out it was time for bed. I guess around 1.00am a noise woke me up, not enough for me to get up and investigate, just enough to disturb my sleep. Twenty minutes later I was definitely awake when Alex came in, in a complete fury as the noise had been people coming onto our drive, neatly slashing all four of the tyres on his car, and then hurling huge rocks through his rear windscreen and his windscreen.

This then involved me having to move my car in my dressing gown and slippers from in front of the garage so he could get his car in just in case it rained. But not before he'd shifted all his weight lifting gear, motorbike and other stuff out of the way. It's amazing how anger allows you the energy to do tasks like this in minutes!

Then I had to try and get back to sleep asap, as I had to go for a job interview an hours drive away for 9.30 Monday morning. I didn't get the job, which is okay now, but didn't find out till Tuesday.

On my return on Monday the police were at the house, and basically all they had to say was it was the company youngest keeps that caused the trashing of his car.....Very helpful.. NOT!

For the rest of the day I rushed around, sorting out dogs, computers, cars, taxis and sons. Of course ordinarily I wouldn't have done this, but Wednesday was looming over my son and he simply couldn't cope with the stress he was feeling. And I was coping marginally better so wanted to help him as much as possible.

To the point that he's been trying to pack up smoking for a few weeks, and I who hate cigarettes with a passion was heard to advice him to just go and buy some tobacco and give up when he wasn't so stressed!!

Tuesday passed in a blur of stress and fear for both of us. With him needing a lot of reassurance but also needing to apologise to me for putting me under this much stress again.

Today I drove off to work, hoping the taxi I'd booked for him would turn up, and that youngest would text me later. He did just after my first client, saying he was certain he'd be going back to prison. Which meant he hadn't gone into court yet. So I swallowed my pain, as until he had been in court nothing was over as the fat lady was still tuning up to sing, and got on with my work. I coped till about 11, when I had to ask a colleague if they could spare me a moment to listen to me, as I didn't think I could listen to any more clients till someone at work had listened to me.

She just gave me the biggest hug which made me cry, as she said, as usual you're having to cope alone. The phone rang just then it was youngest, he's got community service, and the judge has only given him enough that he can get it done this side of Christmas so he can continue applying to the army in January. And boy does he want to join up and get away from here.

My sigh of relief could be heard the other side of the world I think. Followed by my texting my friends and family who all got straight back to me with love and care.

So I'm home now and strangely feeling ill with a sore throat, but I've got till Monday to get better and to spend a weekend caring for myself and if he's lucky my son. Although I think he'd better be the one looking after me right now!
Posted by Fire Byrd at 16:01

Labels: life sometimes sucks the lifeblood out of you

So glad to hear he hasn't got a custodial sentence. Big hugs! BG Xx

Dear One, I am already exhausted reading this! I am happy that it worked out for Alex however as you took plenty of stress away from him, egtting all exhausted and worked up, I am truly convinced that Alex should now truly care for you and be here for YOU. Love you, please watch out for yourself. Hugs

So much light and shade..

The verdict, a big relief.

I can understand your sore throat - stress after stress is just too much. What impressed me was that in the middle of all the worry and stress you and your son had is that he apologised to you for putting your under so much stress. I am so pleased that you have your work colleague to talk to and I do hope that all works out well for your son.
Take care of yourself now, this is important for yourself and your family.

My goodness, your world does sound kind of stressful. Hope now that you don't need the adrenaline flowing you'll be able to lie down for a long and much needed deep sleep.

Good news about the sentence. Hope young son has seen the end of his errant ways and will stay home to care for his mum!

Oh my Mandy, what a week! And in the end what a relief! I always get a sore throat too when things get tough. But that will pass.
Noe pamper yourself for a while and get some deep breath. You will have a wonderful Christmas now!

Wow--I'm relieved for you and for him to hear about the sentence. Talk about an opportunity that I hope he seizes for all it's worth...oh pleasepleaseplease......

And you--ya poor thing..were smart enough to pack the days preceeding chalked full of 'stuff' and goodness. Cuz boy..did you need that stuff to fall back on when the dam of 'uckiness' broke.
Deep breath.
Remember this for what it is--another (hopefully) growth opportunity for everyone involved.
And REST for crying out loud.

Oh! Mandy! What a time you've had! (((HUGS))) At least you had some fun before stress. It's good that your son got community service and not prison. I hope you can relax and feel much better by Monday.

You need some tender loving care my friend. Life is really testing you and your boy. Sending you BIG hugs from across the pond and hopeing you manage some down time to recoup. Stress is making you ill ... Be well Mandy.
Love, Lyn

Keep well. How you managed to see your way through this, I can only wonder. Onwards, upwards, and I'm sure the army will be good for Alex. He is probably a young man suited to it and I hope it will help tremendously. What a relief with the verdict. Hope you are all feeling better, including the dog!xxx

It is often more stressful to support someone you love going through a difficult time than it is to go through it yourself, especially in th circumstances you have described for Alex.

All of this could represent a new start for him, and for you. Alex has been given an opportunity to do his community service and sort himself out and look forward to the possibility of a new career.
You will continue to support him through this. You need your friends to see you through, as it is important that you you stay strong for yourself.

I'm thinking of an old post where you described how your oldest son had sailed through. This reminds me so much of myself and my brother. I sailed through school and uni into a career. My brother, nine years younger, ran with a different crowd, left school at 16, joined the army then went AWOL, joined the French foreign legion went AWOL after 3 years and came back to the little town in the Welsh valleys where we had been brought up.

THEN... he found himself. He went to college to do A levels, uni, worked as a languages teacher married and finally joined the RAF as an officer and is supremely happy and fulfilled.

Mandy, I tell you this only to try to help you understand that we all do things in different ways and at different time scales. For my brother it was very difficult to follow in my footsteps even though he was actually much more able than me. I worried about, him and tried to support my parents as they felt they were living on a knife edge. He got there in the end and I hope Alex does too.

Look after yourself, and share your thoughts and worries with others who will give you the courage and strength to get through this.

I hope your son gets the new start he desires in the new year, then maybe you will be able to pursue your own dreams.

Good news for your son.. but geez Pix, you do have lots to deal with!!
big hugs to you xoxo