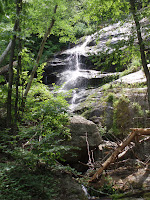 Pam had an interesting post yesterday about how she had changed in the two years she'd been blogging. And she asked her readers to say how we'd changed. Well I realised that the last two years have been monumental for me and I'd have had to write an essay in her comments. So I thought I'd do it here instead!

So this time two years ago I was at the tail end of a short four month relationship with a fellow blogger. We'd had a bit of a whirlwind passion going, which involved us both travelling a lot of miles to see one another alternate weekends.

It had been a destructive four months for me in lots of ways I see now. And also very revealing about myself. In that for the first time I was asked to question my behaviour in relation to men I was going out with, by this man.

I became aware that since I was a teenager I'd not really felt very lovable and so to get a man because I was a woman who'd read Fear of Flying by Erica Jong I would use sex as a way to start a relationship. So the bloke was on to a great thing, there he was getting great sex with seemingly this together woman. And then as I felt safer I'd start to become more vulnerable and needy. This wasn't what the men I went out with had bargained for and suddenly the relationship was not so straightforward as they'd thought. So relationships became a minefield of my wanting something the men didn't want to give.

At that time my blog was in a state of flux as I'd shut it down after this relationship. This was historical, as in my first blog the week after I started it, the man who helped set it up, who I'd been going out with for almost a year, broke up with me.I was completely devastated as I'd thought he was a forever man and I'd loved him very deeply. This then meant that my very broken heart got played out on my blog. And I simply didn't want my to do this again with my anger at that time.

The relationship ended and I went as ever to America to stay with my best friend. During this trip over I hired a car and drove for 7 hours down to meet Sorrow~.Being with her for three days was a revelation. We climbed mountains and talked, sat in porches/ kitchens and talked, walked her labyrinth and talked sitting on the bench beside it. And one of the many things that emerged for me was how I was metamorphosing. I described myself as feeling like a phoenix rising from the ashes and Fire Byrd was born.

The last two years have been a real emotional roller coaster, a massive voyage of discovery. To the point today that I feel for the first time in my life totally at peace with myself. I work at living in the moment, and even more so in knowing that bad/difficult/scary feelings won't last.

And as for relationships with men, well I haven't had one now for two years and that is absolutely fine. As where I am now I will not behave as I used to, and it feels that any man interested in me is only going to get my attention my being friends with me first. Or being the one to do an awful lot of work to convince me it's worth letting go of my inner peace with my aloneness. And I know my self worth is now strong enough that I do not have to use sex as a way to get a man. I am finally better than that.

NB I don't thonk I made it clear enough in the above, but blogging has done this for me. If I hadn't written and written the thousands of words I have in the last three years I wouldn't have changed. As I would never have identified my patterns of behaviour however much they were pointed out to me.
So on top of that it is the friendship and support of my friends here that has held me whilst I changed from a caterpiller into this beautiful butterfly that I never envisaged I could be.
Posted by Fire Byrd at 21:44

Labels: two years three blogs and I'm good with myself

Wowwee! Lots of heavy stuff going on over there. Glad to hear you got it together. I was the type of girl who gave away myself to please a man..NOT a good thing..Also got a little obsessive and needy and not good! When I met my husband, he was "not my type" meaning he was kind and good and loved me first. I didn't go through all that craziness. It feels so much better when you are comfortable without feeling desperate..a sigh of relief..

Big, big changes and well done you for getting it all together and breaking a lifetime's habits and patterns.Bet you feel the weight off your shoulders now hey?
Big changes for me too as I think you know.Life's good!!

Oh SNAP!!!! If only I could relay it as you just did on my recent post! That's exactly how I feel, no longer using sex to try and start a relationship! And yes, I'm happy being on my own for once!

That said in my last three weeks I seem to have reverted back to every bad co-dependent habit I ever had. Trying to take care of everyone else and getting lost in the mix. Thank goodness for my blog buddies.

Mandy, you have the most gorgeous flower pictures I've ever seen.

I can relate so very much. As you know how freaking codependent I used to be, you know that anyway. Recently being in Tampa it ws the very first time in my life where I acted diferently. We can be proud of the work we have done. Chapeau! Hugs

When I met you last year, Mandy, I saw nothing of that self-destructiveness in you, but a thoughtful, friendly, not needy, simply lovable woman. I thought you were very easy to be with, and so probably you had already become that beautiful butterfly that you only now admit to be!

You know Mandy I always feel it's such a privilege to share such insights and heartfelt reflections.I feel humbled sometimes at the beauty in all of us,sometimes tentative, sometimes on shaky ground, sometimes bold, but there nonetheless. With all our vulnerabilities,joys and heartbreaks, we recognise where someone's coming from, often, and with the wisdom of experience, sometimes gained at great cost.I look forward to your posts very much, and glad you opened up the subject of happenings in the last two years to explore even more.Your writing about these years makes me appreciate your struggles, and boy have you emerged triumphant...truly beautiful!

What fabulous insight blogging has given you.

I wasn't with you on your earlier journeys, so I've only seen you as the beautiful butterfly you've become. But I do understand your earlier need to give away parts of yourself for the approval of others. Many of us have been there, I'm afraid. I'm so glad you see your true worth now!
xo

....and it's been a pleasure and privilege to be along for the journey....

I have the most wonderful amber coloured egg.
There's warmth and love in there.
There just IS.

Thanks for your visit..sorry to hear about your awful situation with your car..so, so sad and hurtful to you..Blessings, Cynthia

That is just so brilliant.
It's wonderful to see people grow and develop through blogging and it's so good to be part of it all.
I myself have not yet done 1 year, but I do know that I have grown through it and found some wonderful people like you into the bargain.

I have always had the opposite troubles with men. In that they have often moaned that I do not need a man for anything, except sex. I guess we can't always get it right and men can be just as contrary as we women.

I'm glad you are at peace with yourself now, that in itself is an achievement to be proud of.

yes, I remember that relationship (gee, is it two years? wow!)
I have watched you grow & morph into who you are, I am blessed that our blogging paths crossed.. I know & understand you as you do me and I am lucky for that.
You have changed yes, but you will always be Pixie to me xoxo
ps - bloody hell.. I change daily, how would I answer that? xoxo