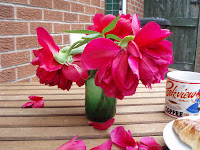 I just thought as I'm still feeling ever so serene I'd 'fess up to some of my guilty pleasures in life.

As I mentioned the other day I won't be discussing how many cashmere jumpers I have, but they are a definate pleasure in life. I'll save my money till I can buy a new one. My collection goes back 20 years and you wouldn't know which of the jumpers I have which was the oldest at all. They are loved and cared for, so they last and last.

You all know my passion for designer bags, and the one I've got currently is my third. Although the second one doesn't really count as I got it at a real knock down price in New York when the exchange rate was in my favour. And now it has been recycled and is being used by Kit's girlfriend.

This particular passion only started four years ago. There was I, out in the big city, Manchester, for the first time since all my ops. I had treated myself to a facial. And was just mooching about before I ran out of strength. When I saw this bag, it was unbelievable. Tan goat skin, squishy, and not so big, but big enough and it had two small metal badges on it declaring it to be Prada. I was instantly in love. But I reasoned I couldn't justify spending money on something so frivolous as a handbag. I argued with myself, telling me that I deserved it after all I'd gone through, no that wouldn't wash look how much it cost. And on and on I went, until that small child who'd gone through so much in the previous months just said she wanted it. And if she had that bag, people would look at that and not know that she only had one tit. I loved that bag with a passion, it did all the things I needed it to, it made me feel good, it carried everything, it wasn't blindingly obviously a designer bag, unless you were in the know.

However all my pleasures are not so expensive, one of them is something I watch on the TV. I rarely admit to this, as it really is a silly programme, but I love America's Next Top Model. I don't know why, I do not find it necessary to watch any of the other countries Top Model. Maybe it's Tyra Banks, maybe cause it's the first, whatever it is, I watch it and don't tell, cause people will just roll there eyes that I'm watching such garbage.

My newest pleasure and one that I have to curtail is coffee flavoured Swiss Roll. Up until today I have bought one a week for easily the last month or so. Today when in the shop that sells them I was strong minded and didn't get one. And I'm really missing the fact there isn't one in the house. It will take me a week to eat it a slice each night for dessert. But today I was being puritanical.... I could however stop by the shop on the way home from work tomorrow mind!

I love coffee with cream in it, but since I mainly drink hot water I am full of missionary zeal about the dangers of drinking coffee. So I allow myself two mugs a day in the morning. They are both weak, with sweeteners and black. And therefore are permissible, in the coffee is bad for me argument, I have with myself. All is well unless there is cream in the house. And how the cream gets off the shelf in the supermarket and into my trolley remains one of life's mysteries in the first place.
But if there is cream, then my biggest mug, with strong coffee and a hint of sweetness and loads of cream is my idea of bliss.

I could go on and on, but you'll just think I'm a self indulgent junkie and that wouldn't do as I'm an upstanding citizen......

Now where did I put that Walnut Whip????? (Chocolate filled with fondant and a walnut on the top, not a sexual deviation!!!!)
Posted by Fire Byrd at 18:46

I miss coffee, I'm not allowed it any more due to the fibro.
Herbal tea is just not the same.
Don't get me started on handbags or shoes, I could open a shop with my collection of them.
I can't buy the shoes without the bag and visa-versa.

One of my favourite coffees is the vanilla one from Whittards, yum.

What's this nonsense about coffee being bad for you? Latest research finds that in dignified quantities it stops Altzheimers, Parkinsons and such.It also gives comfort and joy, which reduces stress and gets those good anti-depression thingys going.
I'm going to be very frank now, please don't take a fence.If it's British coffee you're drinking out of jars, cafes or Starbucks it probably is bad for you.Good coffee properly made and served with some respect and ceremony can only do you good.
As to handbags and shoes..didn't Rod write a song about that? Ditto, if it's self-indulgence go for it! I have no time for marytrdom, especially after dire circumstances.You go girl!!

Not to worry, Mandy. We all have strange addictions. I watch Big Love, a soap-opera type mini-series on HBO about a Utah Mormon with three wives and a creepy family past. My husband rolls his eyes, leaves the room and mumbles each time I watch the show.

pix, ya gotta live.. you are like me.. the voices of arguments going on and on in the head.
so enjoy that coffee flavoured swiss roll.. one slice a night is not bad.. plus you do all that walking and enjoy with relish that cup or two of coffee a day.

I would kill for a cashmere sweater.. never seen one in my life, but just the word cashmere sends me into a spin..

I love reading about your guilty pleasures! I think it's delightful when we are inconsistent and admit it.However, you did deserve the designer bag after your surgery ordeal. When our mother's are gone, we have to be a mother to ourselves! I'm now curious about your dessert treat and why you drink hot water. Oh my own confession, I used to have a Mexican lunch followed by a large margarita at Casa de los Picos in Old Town (San Diego), go shopping for some ethnic wear (which I usually didn't buy) and end the afternoon with dark almond chocolate bark. I loved my outing- especially when I was out of cash and used my American Express. (What a rule breaker!!)

Oh boy , you got me with the WALNUT WHIP!!!! When I lived in England, I had many vices and that was one of them...English choclate is so much better than American...all the yummy cream cakes,chips oh I could go on and on...When people say the food in England is crap I do not know what they are talking about..really loved Von's comment..I agree with her...I think "sweeteners" if artifical is far more harmful...One minute they say coffee is good for you the next minute its bad...bla, bla ,bla...If you think its bad for you it is..if you enjoy the lovely feeling it gives you (without any silly guilt) then go for it...here's to your health!!

Life's indulgences whether the little ones or the occassional biggies are what makes it all worthwhile. Throw in a handful of gratitude,a heap of enjoyment from the purchase, and it makes for happiness and smiles all round.

Can relate so very much. Love bags and belts and in particularly Prada and Mulberry, Aigner too. Anyway I stopped feeling guilty about it. Indulging and spoiling ourselves is part of self care. SELF CARE. Can you see me grin and chuckle. Love you, Paula

Don't drink coffee. Love my daily iced tea. Don't ask me to give up my daily cola.