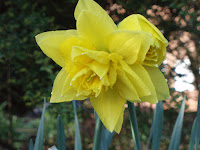 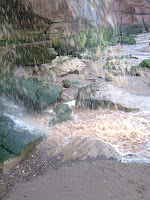 I was going to tell you about a sad occasion in my life. A memory that was triggered by the last couple of posts. But it isn't the right time, I need to be more miserable than I currently am to want to go down the difficult parts of my memory lane.

So I'm sitting here at my desk with a glorious bunch of daffodils next to me, close enough that if I incline my head slightly I can inhale their delicate but beautiful smell.

If I turn my head round I can see another vase of them just starting to open up on the windowsill, and between these two on the coffee table is a huge bunch of bright yellow tulips, bought by a friend for me yesterday.

So what is in my head is a beach, it's a real beach at a place called Exmouth, and you'll never guess that it is in surprisingly- Devon!

I'm not generally a person who visualises places when I'm not in bed.I use it all the time then, as a way to drop off to sleep, going to my favourite and safe places and walking round them as I get sleepy. But this morning was odd in that I was walking Trix on the back field at school and suddenly I wasn't there anymore. I was walking on this beach, hearing the waves on the shore, seeing her running in and out of the waves. I knew it was very early morning as no-one else was about so it was safe for her to be off the lead. As far as I know she has never been to the sea, well at least I've not taken her since we got her. So I don't know if she even likes playing in the water.

But this was so strong it's taken a long time to shake off, and in fact I haven't really yet, hence writing it here.

Now I'm a very pragmatic person, very down to earth, what you see is what you get sort of thing. Not given to flights of fancy. Excepting of course I do have a high level of intuition when dealing with people.
I can spend time dreaming about the what if of winning the lottery sometimes. I can also when starting to get involved with someone do the whole madness of thinking about nothing else except that person.
What I don't do is what has happened this morning.

I am increasingly filled nowadays with an inner peace. Worries about Alex notwithstanding! But even the worries about him are much smaller as the things he does are so much more normal now!

I can still worry, mainly over things that will be in the future, money worries, house moving, things that as I come up to face them will be dealt with. But the worry stuff comes and goes like the tide. Sometimes one of the waves is bigger than the previous six and it knocks me over for a moment. But I'm getting straight up and then the peace and inner contentment comes back.

Years ago when I shared a huge farmhouse and barn that we took ten years to do up, with my sister and her family, we shared the kitchen but had separate rest of houses. On the door into my bit, I lived in the barn, my BIL and niece did some paintings of black and white cows, around the edge of this in silver paper was the legend Mooland which was all lit up with fairylights. I became known as Mrs Moo, this was because I was so bovine and laid back in comparison to everyone else in the house except my eldest son. I was seen as the person who didn't worry. What they didn't know was on the top I was calm and serene but underneath I was paddling for dear life.

Now though it feels different as the calm seems to have pervaded all of me. Don't get me wrong when I have a worry, I have a worry. But I have learnt that as long as I say it out loud, to another human being I can get myself back. It's when I have no-one to hear me that the worry can magnify, and I'm so much better now at ringing friends up just to let go.... Poor friends having to put up with me!

I don't understand what is going on with me, and maybe I don't need to anyway. Is it an age thing, is it a natural ,like a backlash to last years chaos? Whatever it is and however long it lasts am just going to enjoy it as feeling this starting in the deep core of me and radiating to the edges of me feels fantastic. I've never seen an aura, but mine feels if I could see it that it would be a lovely mixture of greens and purples/pink with a dash of bright yellow and sparkles spinning around me. Which may go someway to explain why most of my clothes this winter have been a combination of purple/pink with a bit of green thrown in for good measure and why I'm surrounded by yellow flowers.
Posted by Fire Byrd at 11:33

What a lovely post to start my sunday with, thank you FB! Glad to hear you're feeling so serene BG Xx

Beautiful post Mandy. I can't help BUT see auras. You're right on with the colours. Purple,spirituality.
Pink -intuition,sometimes called the colour of "planetary intuition"
Green thrown in? Growth colour, indicated person is undergoing change in attitudes, beliefs or way of life.
Yellow-intellect,changing the unconscious to conscious. Suggests changes and moves of all sorts.
Makes sense doesn't it! Sparkle on Byrd!xxxx

Lovely post! And I love the cascading water shot. Powerful energy and quiet stillness all at the same time. x

Mandy - it would seem that you are in a serene state right now ... so much so that you are unable to summon the darkside. I think that it is wonderful that you have the experiences special enough to visualize that bring you peace.

Spring is in the air! Tomorrow it will be March! Now all good things can happen!
I hope this terrible storm that is coming up from France won`t affect you or us! Let`s only expect nice and wonderful things, then they can`t help but come.

Super blog. I'm amazed at your sheer output. I'm so dim I cant find your profile Retired? professional? etc. Very impressed, I'm relatively new to this and find every five days ample. Will be back. Do you mind if I put you on my 'list' Actually my wife does it for me, I'm technically rubbish!

So beautiful Mandy, I feel like hugging you, I want to be surrounded in those color with you! I loved reading this, what a soothing post for sunday morning! I'm going to think of colors all day now!

Beautiful ....I could smell the sea with your description...It all sounds good to me..Us wimmins are growing and learning and sharing and caring together...How cool is that...Stay cozy Cynthia

I love the idea of you sitting surrounded by vases of daffodils!

Sitting between all these Spring flowers? Turns you into my Goddess of Spring. Have a beautiful day.

This is a wonderful post.
Thanks for sharing it with us all.
Much love
Lia
xx

Thank you for a lovely read this beautiful Sunday, Mandy! You've woken up my own auras now, which I think are struggling to decide which colours will win, and are so happy that I'm actually thinking about them again! lol

And I'm convinced your dream walk on the beach is a glimpse of what is to come. Was it cold or warm? How were you dressed? If you want to know, those clues will tell you when it will happen. But I know it will. You will sell your home and you will move to Devon, and Trix will love the water!

And all those butterflies that I've sent out to you are frolicking in the glorious colours of your aura right now. May this serenity and joy in your soul continue!

just loving the thought of you surrounded by spring...
~smile~

Why is it more springy in England than Florida?

I love this post! My inclination now is to really try to live in the moment, to savor each and every element of that moment, to not project (a real fault), to not look back (another.) It's good to know I have great company in my quest.

Thank you so much for your kind birthday greeting to my mum...and oh look!! a little picky of her in your sidebar...how sweet is that...Cynthia Wolff