MEMORIES OF LONG AGO AND LIFE RIGHT NOW. 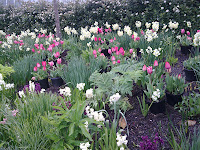 I was thinking the other day about how much I like perfume and flower scents.I'm really looking forward to the stocks being available, as I shall have a bunch a week for the season. Or getting white or yellow freesias, the purple and red don't smell. Even the humble daffodil has a wonderful delicate scent. I got a new bottle of perfume for my birthday, or rather I got a new bottle of one I've been wearing for a while.

And a bit like music having a soundtrack in my life, perfume has as well. There are smells I have adored and others I wouldn't give house room to, and in terms of flowers the ones I cannot stand are lilies, makes me nauseous.

I've had such fun remembering the various bottles that have had a particular impact on my life. Starting with the first bottle I brought in a duty free shop, when I was 15 and going to Minorca with my parents, it was called Ma Griffe, by Craven. I bought bottles of it over the next three years every time I went away, it held the promise of sun sea and and least the dreams of sex, and definitely holiday romance, with doe eyed Spanish lads.

The next bottle that came my way was brought for me, and I was much to young to enjoy it, it was Channel No 5, given to me by my first love. I wore it because he gave it to me, but I can't say liked it till I was much older. But I loved him very deeply, and this always made me feel close to him when we were apart. Which probably explains why I was a bit like Marilyn Monroe, as I too wore it in bed!!

The smell I associate with my Mother was Joy by Jean Patou, a smell I stole from her and she would then replenish my supply at Christmas. It reminds me of her dressing table with it's drawer of old lipsticks and messy powder compacts

There is the year that I drove to Calais to met my husband, he couldn't come back in to the country for three weeks for tax purposes, after six months away at sea. So we met up and drove slowly down to Venice. He had got me a bottle of Arperge by Lanvin, a perfume I came to to adore, and still love to this day.

By the time my eldest son came along and I was in my mid 30s, the perfume had got very heavy, Opium by YSL or Cinnibar by Estee Lauder, smells that if I encountered today would make me gag with their sickly cloying smells.

The next perfume I was bought by a man, was L'Eau D'Issey by Issey Mikake, by the man who would become by second husband when he went to Japan for work,and when we still liked each other. We stopped liking each other the day we got married, which probably goes someway to explain why we were only together for five weeks!!!

The smells of the last few years have been heavily influenced by Jo Malone, who makes perfume of one or two notes, and my favourite of these, and one I'm into my fourth bottle of is, Honeysuckle and Jasmine. Which to me smells like summer, with an ever so gentle reminder of suntan lotion of long ago time in my life.

There are others that stand out because they take me back to where I smelt them, I cannot smell Clinique Elixier without in my imagination being with my friend in Philadelphia as it has always been her signature scent.

Or the few years I spent going to stay in France in the summer with my friends, who now live in Devon. Those holidays passed by in clouds of Helmut Lang. Or once on a trip out to Grasse and a visit to the Fragonard Perfume factory some of their perfume was purchased. I still have the last remaining drops of the wonderful precious scent obtained there. One smell of the bottle and I'm back sitting in the Veranda drinking local Rose and having long lunches of bread and cheese in the shade of the midday sun overlooking the Luberon.

Right now the two bottles I have on the go are the Jo Malone and L'instant Magic by Guerlain. This second one is the one I had for my birthday from my sons. The first bottle I got in December, and wore all round New York. So evocative memories of a wonderful holiday. I love the headieness of it, it's reminiscent of another of Guerlain's perfumes I used to wear, Shalimar, that I've now outgrown but have fond memories of from a lifetime ago.

And I have handed on this enjoyment of smells to my youngest son who has the finest collection of aftershaves known to man. And each represent a memory, usually of a girl to him....

So do you have a scentrack of your life?
Posted by Fire Byrd at 15:41

The main thing about perfume for me, is being able to remember what my mum's favourite is!

I have two or three bottles of aftershave: never opened.

But I can appreciate how such things can help to form and to stir memories. There are one or two particular ones which are very evocative for me, though I couldn't tell you what they're called...

A scenttrack of my life? What an opening!

My grandmother's fave was Chanel #5. I don't know if I'd even recognize the scent, but the name conjures up images of her sweet smile as she opened her annual Christmas bottle of good smells.

My mom may have had others but what we all remember was the bottle of 4711 sitting on her dressing table. I don't think any of my sisters nor I could resist a little spray on our forearms any more than sitting on her bed watching her get dressed to go out to a party. Black crepe sheath or red chiffon. Red lipstick outlining her lips just so. And a hint of the tropics from the perfume.

I kind of got away from wearing perfume when I became fixated on matching bath gel and body lotion. One to wake me up in the morning, one to put me to sleep. I think I miss the spritz of good perfume.

My husband bought me a bottle of Vivre in a little French perfumery in Nice. I felt very ooh-la-la. And wearing Tea Rose always made me feel, dare I say, rosy? Like a garden in the summer sun.

A smell of Aramis takes me back to some forbidden times and Abercrombie's Fierce brings Sweetie to mind.

I think I shall go douse myself in lavender to soothe my out of sorts soul.

Sorry to write a book on your blog!

Well this is certainly an intriguing challenge!

I love fragrance, always have. I have gone through phases and fads to be sure, but these are forever ME.

Anais Anais (Cacharel/which I also discovered in a duty free shop) It's fresh and saucy.

Magie Noire (Lancome) It's so sultry and mysterious.

Alexandra de Markoff perfume oils ~
Enigma and Alexandra These oils stay with you for what seems like days and compliments are endless.

I do have a scent trail to my life and most of it is Calvin Klein other then my first perfume which was Coco Channel no 19 never liked 5...xx

I surrendered perfume and moved to bath gels and lotions about the time I started doing treatments.

Though I do remember my birth mother's Evening in Paris scent.

Strange I'd remember that.....

All the women in my mother's side of the family have worn nothing but Mitzouko by Guerlain, and I continue the tradition. It is my signature, a piece of me.

I love that Mandy, a scent tract of your life! it's so true. You have some great memories there, I loved reading about all of them.
One sniff of plumeria takes me back to Hawaii and Chanel #5 has been all i've ever worn, my Mom and her Mom too!
♥ lori

Dear Byrd...I've missed a few of your interesting posts! Just popping in to say hi - and lovely photo of you a little while back - so many interesting things to read.

I currently love Fiori di Capri by Carthusia, something I bought when we were in Italy last year. I live with someone who is allergic to scents, so I have be careful not to use too much!

It's interesting how particular scents can call up particular people for us!

I've just been catching up on your posts. I love the concept of "birthday season". Definitely going to do that....

I shared some of yours, including Chanel #5, Opium and Cinnabar (you're right, those two are STRONG) Once got Joy for Christmas but though I loved it in the bottle, on my skin I gagged!

Now I wear Daisy. Started with the cologne and it just didn't stay with me for anytime. Then, I switched to the perfume and a little stays much longer. I love it. It's fresh and clean. I'm careful when I wear it though. Don't want to choke anyone else. I hate it when a woman enters the room or the car and her scent is so strong it takes 10 minutes to get to a point where I can't smell it.

Oh in my younger years I wore Charlie and loved it. By Liz Claiborne I think.

Aren't smells and perfumes just so incredibly evocative. I think I started with Caleche, moved on to Joy, then Ralph Lauren's Safari then, Chanel's Allure then to Gio de Giorgio Armani and Jill Sander No 4, (the latter two remain favourites) then became hideously allergic to anything perfumed for several years and now can only manage, surprise, surprise, L'Occitane's Vanilla.

Word veri is "undab" - how appropriate!