A DREAM THAT MUST COME TRUE 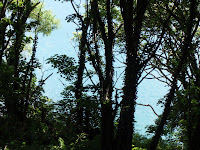 She'd got back to her little cottage just as the threatening storm broke. The sky had been getting darker for a while as the clouds billowed in.The wind had been increasing in strength all afternoon. The weather forecast had said that it was going to be a bad one. They had many days of grey and dismal weather, when it didn't seem to be able to make it's mind what to do.

She'd managed to get back from work and into the house as the first few fat drops of rain hit the pavement. Breathing a sigh of relief, as she and all her bags got inside the front door just as the heavens opened.

She made her way to the kitchen to put the groceries away, and say hello to the dog.It was so dark she had to put on the light, even though it was only four in the afternoon. She filled the kettle, made a cup of tea. At this rate walking the dog was not going to be her usual evenings pleasure!

So sinking down into her comfy sofa, the dog at her feet, she thought about what needed doing. She must have dozed off. She awoke with a start, momentarily not sure what was going on. The sun was streaming in through the window, it's rays warming her.

This was more like it,so donning her coat and taking the dog lead form the peg she let herself out of the door.

They walked towards the water lane, her very favourite road, leading to her very favourite place. She loved the age old stories about the water lanes being the home to the fairy folk. The sun shone through the canopy of trees overhead. It was a wonderful tunnel of trees that meandered for a mile or so. The high banks were sparkling with bright decorations, bluebells, the odd late primrose, the emerald green of the ferns all illuminated by the sun. The little stream that ran down the side of the road, babbled at it's new inrush of water. Even the road had rivulets of water gushing down it's side. The birdsong that spring evening was almost deafening, as if everything was renewed and cleansed by the storm.

As the lane dropped down the hill another noise started to take the place of the birdsong, the unmistakable sound of the waves crashing on the shore. The tang of salt was in the air, and the peace of the lane was overtaken by the screech of the gulls. Rounding the last corner the lane it opened up to the cove.

The cove, as like so many round here was small and surrounded by high cliffs where the seabirds nested. The beach spread before her and she and the dog joyfully ran down to the edge of the sea both of them playing escape from the waves as they crashed down.

They were the only ones about, obviously the other walkers she saw most evenings hadn't made it here yet. This made her feel even better she did something she hadn't done for years. She started skipping on the sand, her laughter at her silliness being lost in the wind. The dog scampered around her ankles enjoying this peculiar way of going on their nightly walk.

They reached the end of the cove, and they both needed a rest after such exuberant behaviour. They sat in a little sheltered nook in the rocks. The dog putting his head on her lap, and she absent mindedly stroked it's ears, whilst enjoying the feel of the warm sunshine on her face.

She felt drowsy again and thought 'I must get moving,but I'll just have another minute first'.

This is my dream, this is what I want and need to do. Maybe not this beach or this water lane. But I want to be near enough to the sea that I can take my dog for a walk on the beach in the spring evenings and skip along the shore if I want to.

It may not happen this year, as Alex has told me he's rather I didn't go for another year, but it will happen. I will go and live in Devon, and not just visit to stay with my friends down there.

I've got my fingers so tightly crossed that Al will be well enough by this Thursday that I can go for the weekend. I so need some me time right now. Both lots of friends are wanting to see me. So it will be a hectic weekend.

But of course if he's not well enough I'll stay here, and as my friend J said there's always the weekend after, or the one after that!
Posted by Fire Byrd at 16:17

Labels: a dream that must come true

Well as long as you do get that you time...I had some me time last week and it was fabulous: of course I could really do with some more of it!

Did you ever discover what it really was that knocked the boy down so hard?

And you do what you need to do for yourself. I think it's a capital idea.

It will happen just keep believing

A girl can always dream. And sometimes dreams do come true!

Wow Byrd - you have been one busy lady lately. You certainly need some me time. Did Alex have a virus, and if so, what kind of a nasty piece of work is that!!!..and the dog troubles. You need a break.Fabulous you. Anyone told you that? Get to those friends as soon as possible and let them tell you how wonderful you are.Jeez - you personify patience.

oh I hope all your dreams come true fire byrd, and why not? of course these things should happen for you my friend. My best good health wishes to your son.
xx lori

Yeees! Go and do that skipping and running and dropping on the sand and rolling on it and seeing that smile on your dog when she can run along with you! It`s all possible and there for you in the near future! In your next dream, visit me here on my island with the beautiful beach! (look up Usedom at google!)

He must be feeling better by now. Stomach bugs tend to strike hard but don't linger too long. Good luck with the dog. Ask your vet to refer you to an animal behaviourist, and make sure you're insured first!

What a wonderful dream you completely swept me away with you, I hope you do manage to get away this weekend...xx

Lovely dream... I hope you get to Devon soon. I could just envision your walk with your dog. How lovely and something wonderful to look forward to experiencing for real.

Beautiful words and a great blog,

Heres to dreaming and to their realisation,

I'm crossing everything that this gorgeous dream comes true for you... x

Its good to have a plan. Even if it takes a while to achieve it!

Oh hon, one day your dream WILL come true! I so hope you make it their this weekend x

I'll keep my fingers crossed for you, too. "Me" time is something everyone definitely needs.

How is Alex doing?

OK Anonymous,you've offered to kiss me twice, your now frolicing on a beach with me. You've told me you've had seriously difficult times in your life.
How I do know that these are all you.... I'm obsessed with my stats and I know which internt company you use.
So double dare you to stop being anonymous.
xx

Mr Forgetful, what are you triple daring me to do? I'm not that anonymous nor am I hidden here in what I look like. So you'll have to be clearer about what your daring me to do. And as for you, well what do you want to tell me?
x