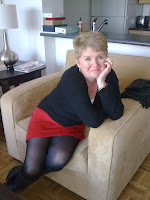 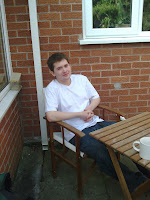 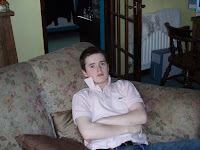 I was going to talk about how very odd my sons are at the moment, but I've realised I know where they get it from, so I'm going to confess to our mutual madness. So that someone can do us a family package of treatment! Which of course may work out cheaper than individual locking up in a cell wearing straight jackets.

So starting with me..... How come when I was unpacking the shopping, did I have some paper rubbish in one hand and the new pack of butter in the other find it necessary to throw the butter in the bin and retain the rubbish? I heard the thump as the butter hit the bottom of the fortunately empty bin. I stood there trying to work out why the paper had made that noise????? I looked down to my hands and had a eureka moment of understanding! Rescued the butter, fortunately still in its wrapper! Wiped it off and took the wrapper of quick before anyone saw what had happened...... I was alone in the house! And put it on the ready butter dish. I even managed to put the rubbish along with the now empty wrapper in the bin..... Hey Ho!

Moving on to eldest son, who as you know lives in London. He sent me a text yesterday morning. He and his house mate were returning from a party in Golders Green to where they lived in Ealing and eldest suggested that they see, as it was before 7am, which was the most efficient route back on the tube home (I'm sure the before 7am is significant but no idea what!). The potential route has many changes and it fairly complicated but they go on with it. My son texts me at 10am as he is still riding the tube, having first sailed past his stop in Northfields to the end of the line at Heathrow as he was asleep. Only to then go to Hype Park Corner, still asleep. Followed by a journey the wrong way to the other end of the line to Uxbridge sleeping. So he definitely proved that his friends route was the shorter as his mate had been asleep in his bed for two hours whilst he tried very hard to stay awake long enough to get off the damned tube, before he was chucked off for being a vagrant!!!!

And the last bit of insanity..... Youngest son, on getting home in the evening always goes to watch television for a while before bed. He quite often falls asleep downstairs, and if I wake up in the night I sometimes go and chase him upstairs to bed. However Friday night, I slept through to wake in the morning and go down to do my normal sorting out to start the day with a tidy house. I know I've got OCD but I just don't like plates and shoes all over my living room.

I always plump the sofa cushions up, so my sofa looks inviting and squishy to sit on. Only to realise that something was seriously wrong. I went charging upstairs to interrogate the offender, who had no waking recollection of what he'd done, but had a vague semi sleeping thought about what he'd done. The little bugger had got up from the sofa to go to bed, and got lost between the sofa and the toilet (about a 10 step journey!) and had opened his flies where he thought the toilet was and pissed all over my sofa in his sleep!!!!!

All of these events happened sometime Saturday morning, was there something in the air or.....

are we all barmy and it's obvious to me that the mother is to blame!!
Posted by Fire Byrd at 10:08

Labels: the strange tale of the butter tube and soggy sofa

I couldn't help smiling away. If anything it makes for an interesting life, and I am sure there are no shortage of smiles at your table :)

Oh, it`s definitely in the air, and you are not to blame!!!(tehee)
Things will get better after the solstice!! Surely.

Mad as a box of frogs the lot of you ;) If it's any consolation I throw teaspoons away on a regular basis...and try to wash the teabag :$ BG x x x
PS, if I don't manage to make it back to your blog, have a wonderful xmas.

I can safely say, possibly with the exception of pissing on the sofa most of that is completely normal.

When we went to Wembley in August the lads spent two hours riding the tubes which should have been 20 mins....lol..xx

Mostly cute, funny and harmless. Other than the one mess to clean up, no harm done and nothing to worry about!
You and your boys are absolutely perfect, just he way you are!

We all have these moments, if not with quite so much synchronicity!

I could sit here and tell you about a friend whpo peed in the fridge thinking it was the toilet or how my mother decided her priceless quilt was safer in a garbage bag with my father living in the same house.
Maybe about how my brother was arrested for breaking into a car that strangely look exactly like his own parked a few lanes away but why when your Saturday says it all.

One thing I've never done, is faleen asleep on the tube and missed my stop....

Dont' think I've ever pissed on a sofa either. (still thinking)

oooo word verif is slanta....santa with a lean?

Oh hi fire byrd! nice to see you(and your handsome sons too), none of that sounds a bit off to me, i have 5 kids of my own, so if its not one, its another(or me!).
xx

Cute more than crazy I fear!

Your son lives VERY close to me BTW...

This was so hilarious, in my 14 years of stepmotherly experience, i can completely relate to the antics of Boys. love 'em to bits! xx :-)

We had a friend who mistook the cupboard where his wife kept her receipts for the toilet. Well, you know the rest of the story. I've thrown butter in the bin, too, by the way.

Be glad there's no hidden camera capturing all this--

OH! And the happiest of Holidays to you and yours, ma'am!

Insanity and genius - its a fine dividing line.

I just love the fact that other people are as nutty as me!

Laughing, although I shouldn't, at your son's thinking the sofa was the loo! :D