WORRIES.... ENOUGH TIME TO MOVE ON 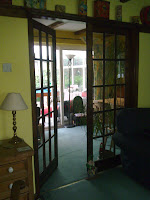 Now I like to think of myself as not being superstitious. I don't care about ladders, or salt, or cutting my nails on a Friday.

But I do have one that is so entrenched that I sometimes wonder do I make things fit it. And that is things happening in threes.

When I was a nurse, if one person died on the ward then that was ok, but if two died close together, there would definitely be a third within the 24 hours.

So when things happen to me now I don't bat an eyelid if it's just the one, but....

Anyway I think I've had my three disasters for now: The credit card fraud, my youngest son being kicked in the head by grown men and now my car being damaged.

It's time to move on to jollier things that don't stress me to the point of stupidity, which is where I have been for the last couple of weeks.

I know an awful lot about stress, well I should, shouldn't I!!
I spend my working life talking people through it, from dealing with panic attacks to using other stuff to try and avoid the feelings.

But even though I know all of this stuff, it doesn't always help when I lose the plot for whatever reason.

Umm this must have something to do with being a human being first and a therapist second!!!

So this week, I've been headachey, feeling sick, weepy (lots),worn out, short tempered. I've driven badly as my concentration is shot to bits. Heaven only knows what sort of therapist I've been this week. I'm just hoping no-one noticed!!

The week is now ending and today I've been in a better place. A place in which my first reaction isn't stress. I've had a day off, well, from paid work. So I've done chores to de-stress me. These involve tidying, I do love being in a tidy place, I have more than a degree of OCD! So weirdly my treat for the day was to go into youngest with attitudes bedroom and sort it out.

I now know that the little treasure has 9 pairs of white trainers.... WHY? And that they are all lined up in two rows under his bed, which makes me happy. Sad or what!

All the beds in the house are made to within an inch of their lives. The duvet covers are straight, the pillows plumped and the cushions just so, which also gives me pleasure.

The washing is done and ironed and put away.

The list of things I have done today goes on and on, but I'll spare you all the gory details of my obsessional behaviour.

Suffice to say I feel so much better now my house is in order. Course it won't stay that way, but that's not the point.

The point is that my focusing on silly daft chores I have moved my unhappy stress energy into positive feelings and am now back in my normal optimistic place, and that is so much better.

I'm going walking tomorrow with the lovely Trousers, and so now I'm in a better place it will mean that he doesn't have to listen to me droning on about it all, and we can have a walk in the rain which is forecast, with good conversation and no cares!!!
Posted by Fire Byrd at 18:30

No, I'd be happy to listen to your worries if need be.

Bbiigggg hug. Know where you're coming from. Last month was a doozy.Astrologically Mars was in retrograde or something, and so many were having a hard time with their 'troubles in threes'.Not usually into the astrology but thought SOMETHING has got to be going on here, and looked it up.My tangle of three is working itself out so all the best for you. Horrible about your car!Things will be getting better for us all soon...and yeah, when I'm anxious I tidy up and clean.Hang in there, and visit again soon.

Ah yes.....when I'm feeling out of control of all that 'stuff' going on around me--clean. Put something in it's place. Rawr!

At the very least, a bit of control exercised on that world surrounding me helps keep me satisfied and feeling like I've accomplished SOMEthing!

mei, I could almost stay up all night sos not to make a mess of my bed!!

pam, glad that your three things are getting sorted. And thanks for the hug, much appreciated.

mel, I don't clean I only tidy. And I'd happily pop over if I didn't think I'd have to do battle with a giant spider first. Not keen on spiders!

The last time you were on a cleaning spree i offered for you to come and clean my digs, while i put on the kettle and watched, It sounded good to me, but I couldn't fly it past you. SO this time I shall simply offer to come over and Mess your place, if you need to straighten more...
See how sweet I am?
and while you fix your bed cloths, i make tea and watch you work... in your digs!!?
LOL
just being cheeky, don't mind me, I am in a MOOD...

Relief is all we need. Feeling better, and then feeling better even more. If you can manage to change your thoughts, then your feeling will change, and good feelings is all it takes. This is what I was TOLD (again by those Hicks CDs (The Power of Emotions), and I do believe there is thruth and power in it.
I feel like laughing a bit with you (for nothing, if necessary)and I`m sending you a lot of love and friendship from here!

OK Sorrow, when do you arrive?
i'll put the kettle on as soon as you say!

Angela, like the idea of us laughing over not much at all, sounds a grand plan.And the love and friendship are just wonderful bonuses, thank you.
xx

Mmmmm... I have "that" too. When I think of a vacation, I think of several days off at one time to make the house PERFECT. Is there a diagnosis for that? LOL!

Hugging you, and happy to see the following day was so beautiful.

Sounds like we had a week we'd both like to forget on either side of the pond. Mind you, I'd say you have me beat!

Thanks for black boxing over to mine today, thought I'd pop in to return the favour.