STOP PREVARICATING BYRD, AND GET ON WITH IT!! 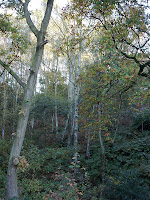 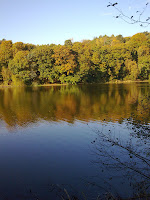 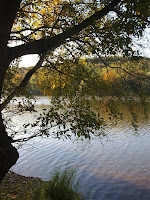 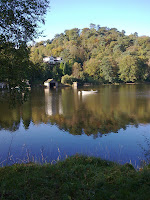 Yesterday I went to a conference, it was the annual conference of the professional organisation that I belong to.It was as inspirational as last years for me.

After I'd been to last years I started writing my book, and yesterday's energy boost has made me realise that I need to start writing again. It's no good prevaricating and putting it off, which I'm so good at doing. Recently I've cleaned my cooker and tidied my drawers rather than write. Not that they didn't need doing it! But it has been about being bone idle in sitting down and working.

Which is silly cause I know the sense of satisfaction I got from putting my knowledge on paper was profound. And I also know that it is selfish holding on to my knowledge.

People get so lost, for whatever reason and I know that the stuff that I do works. So in not writing out this damn book I'm almost denying people a resource that they could use.

I know that I need to write out everything first in my own quirky fashion, and only when I have done that can I then start to rewrite it before actually considering whether or not it's good enough to send to a publisher.

But that is part of the problem of writing it out, there are so many words in my head, I don't know where to start again. Depression/ anger/ eating disorders they are all jostling for space to be written along with a whole pile of techniques that can be used to help change someones perspective.

I need someone to sit me down and say I want answers about x subject then I can get on and write that one out.

One of the wondrous things about the conference for me, was actually realising that nowadays I know what the great and good are on about, things such as attachment theory, transference, separation anxiety. Things that when I was taught them millions of years ago made no sense to me at all. And that now I can make sense of to other people who are not therapists. I can take all the psychobabble and make the words understandable in every day language. And having that skill means I should get on with it.

The conference was exhausting and J, my friend from Devon, who is another therapist, went to it as well and then stayed with me last night. So this morning we went walking at the lake at the bottom of the road. So I thought I'd just show off the day as it was utterly stunning walking this morning. And made the world feel a very good place to be alive in.

So wish me luck, if that's what I need, or maybe it's determined attitude in the morning, to get to this machine and not waste time playing, but putting some work down. And in telling you I'll lose face if you ask me why I haven't done it later!!!

NOTE... I've written the first chapter 3000 plus, which is not bad considering there are sevon others all ready written!! I've put it up on my other blog if anyone wants to read it.I've also just discovered a lost chapter, couldn't figure out where one had gone and just found it on my memory stick.... ooooh am I feeling smug now!
Posted by Fire Byrd at 16:46

Labels: prevarication wasting time just get on with it messing about and on and on

I am the same about writing, I am ok once I get started but it is having the discipline to sit down and write instead of blogging etc.

perhaps you could start with self discipline

Or something else I could do with some answers on. The inability to express feelings through tears when it really matters. I can cry at the drop of a hat reading a book or watching a film. But couldn't cry at the death of a loved one or when I had cancer.

oi i can't wait to read your book and the work in progress as it's progressing whilst you're at it.

i want to know how to let go of associating feeling low with not eating. ie unlike people who eat when they're unhappy i know i eat only when i'm happy. so i want to be happy and not eat so much - what is the answer?

anger! do anger first.. that is the one I am dealing with now and any wise words from you would be so appreciated!!! I get so angry sometimes, at life and more so at myself.
I am catching up on blogs slowly.. my little time away has been good for me.

Great post. Go for it. I ghosted a war veteran's memoir for a lady who had so many memories in her head she couldn't get them down.

Drawing her out with questions was the key for her - and in that case, creating a chronological framework to hang events on sorted out the logistics. Try using a hand held dictation machine (or microphone to laptop?) to talk into if it's easier for note making; have a look at imindmaps if you've not used them. They were developed at Oxford for essay structure.

You never know where these things will end up. BBCNI picked her memoir off the internet and based a documentary on parts of it. You can imagine how thrilled she was.
All the best!!

And I too identify with what you're saying. In fact it makes me realise that it was this time last year that we met in the pub and you were telling me all about the conference then. You were energised and inspired - and that, followed by meeting up with other friends later in the evening, served in part as a trigger to me starting to draw again.

But the main way in which I can identify with this post is in terms of my making music (or not doing) - when I'm actually doing it, and the ideas are flowing and taking shape, it's one of the best things in the world. So why on earth do I end up procrastinating and finding other things to do instead?

See all the good advice you are getting? And all your own ideas are very good, too! You are right that there is a big need for help. There are so many confused people, and not everyone has the time/money to go to a therapist, but reading your book will get them started to think and put some order in their feelings. You are a healer! So just start! If you need support while you are working at it, share your thoughts with us!

You see, I'm the same way when it comes to being a playwright. I have to really work hard to keep my focus, and as I've gotten older, it's become more difficult to do. But...I'll get there. So will you!

Congratulations on your blog, we liked it received a warm greeting

Keep writing you and perhaps we can have a read one day.

Lady it's good to get back into writing, as I'm sure you know,even though our material is sooo very different!!!

mei I will be expanding(so to speak!) on my eating chapter but gotta write all the others first.

robyn lovely to see you back, you have been missed a lot! I've ended up doing the first chapter, not bad after writing six others first. but the words of it will tell you how to start making a difference to your feelings.

vv good advice, I have so many words in my head it's just hard work sorting out what to write first and not to leave anything out.

trousers you're right it doesn't seem a year since we were in that fab pub near yours. I remember last years energy, it was bigger than this years, but now the reason to write is subtly different as well.

angela thanks for the encouragemnet, I've already put my first 6 chapters up in my other blog. It's just taken me a long time to pick up the pen again so to speak,but I'm finally finding the energy to do it.

ron, your right it is more difficult and it's important to not see it as a massive mountain but small hills to be climbed, slowly getting higher with each piece that's written.

sinfive..... what can I say a sex toy site, how relevant.

middleditch, you can read what I've done already. I wrote 6 chapters last winter and they are on my other blog.
xxxxxxxx

..and I think your book should include some of your beautiful photos.

Good on ya for getting back into it! I would love to write a book but I wouldn't know where to start!

There are those conferences that refresh and those that are just a pain in the rearend.

I've GOT to get to some trainings--CEU's are required for licensing here and I'm behind.
And ready for a jump start.
And HOPING for something that'll energize me...
Sounds like yours engergized you--which is a very, very good thing!

I'll gladly read!
Ya think I could get CEU's for reading your writings?
Just askin'.....

CEU= Continuing Educational Units
(they're a pain in my backside....LOL)

Ohohoh!! I wanna go for a wander where you wandered! Very very pretty!

I read your first chapter and commented on it! Great reading!

I still have one chapter to write to finish a story and your think it would be easy to do that and finish the draft but no.
That was 8 months ago and its still not done.
I guess your head and soul has to be linned up to do it.

Just write it all down and sift through everything.
I do that because sometimes i wirte down something obscure I wouldn;t have remembered and this way i can save it for something else.
Good luck with that.
Maybe I look at that last chapter.....soon

I have no doubt that you will finish your writing. I've only read a small bit but it's too good for you not to continue. I don't read when I can't give the author my full attention which is why I've been so slow lately. Scattered thoughts.