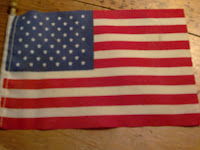 I decided in the interests of the American Election to rewatch series 7 of West Wing.
This has to be my all time favourite programme, the humour, sharp dialogue and the fantastic presidential qualities of President Bartlet (Martin Sheen) It is the only TV programme I have ever bought. I have all seven boxes. They sit waiting for me to need some serious time out, and then to slip on a disc, and not move till I've watched all four episodes on each disc.

Anyway series 7 is astonishing. It is about the election of a new President after two terms of President Bartlet, who of course cause as it's a Hollywood invention is a Democrat.

The Republican candidate is an older Senator who is pro life who struggling to take on board all the things the ultra conservatives want him to do.

Opposing him is a young Democratic congressman who is Latino, and Catholic. His running mate is an old hand at politics having been President Bartlet's Chief of Staff.

Last night in episode 7 they had 'the debate' and one of the questions asked was America ready for a Latino President? The dialogue is so sharp that the producers get you to see that both men are worthwhile candidates, and how you can spend time in each episode changing your mind about who is the candidate of choice.

This series was first shown at least two years ago.

A case of life imitating art!!!

It makes for riveting viewing even though I've seen it all before. I've only watched the last series once before, so although I know who wins it's wonderful to see the connections between what is happening in reality in the States.

So if life is going to carry on imitating art, then the astonishing Democrat candidate Bareck Obama like Matthew Santos will win.

All we can do over this side of the Atlantic is hope!
Posted by Fire Byrd at 18:43

Election Day is my birthday and I am going to celebrate by standing in line at the polls... and when I blow those candles out, you KNOW what my wish will be!

I do have to admit to pleading ignorance on this one, I see it on the news and thats about it...I did enjoy the West Wing though what I have seen of it..xx

I've not seen this show either but I like hearing a good recommendation so I will go check it out! 5 more days till the election...
xx
p.s. what nice sons you have!

Let's hope it life does imitate art. I think even 24 has a little influence with having black americans as Presidents in it. As the charactors are so honorable leaders.

I looooved The West Wing and have also the whole collection.

It was so well made, the acting superb, the story lines great and the writers amazing.

well ya know i don't have a TV, but the sister loved that show...
Gonna vote
of course
and then, I is gonna HIDE!

For those of you across the sea, The West Wing was one of the great series on American television. Its hallmarks were the crisp, timely writing - covered with intelligence and respect for its subject matter at the time - and its ensemble, full of highly regarded stage and film actors. If you ever get the chance, as our Byrd friend has, purchase the DVD series. It's a remarkable piece of television.

- I thought this was a hospital drama....! Just seen the whole collection in GAME for fifty quid, reduced from £200.