Is it a HAPPY NEW YEAR? 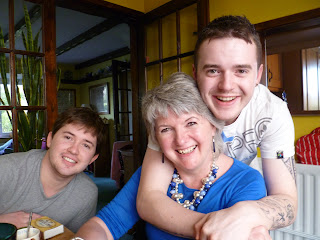 To think I almost called it a day on blogging a few months back.... If I had, I couldn't come here now and let go of the stuff inside me.

As so many of you know I love Christmas with a grand passion, mainly cause I suspend belief in being a grown up and get off on the whole fairy tale element of the season. I don't take any notice of the  adverts from September extolling the virtues of Christmas, except perhaps to get really mad that it gets earlier and earlier each year. But even that is understandable, we are all collectively in hard times, unless were bankers! And everyone has to make a living. I ignore the foul Christmas 'muzac' in the shops and the attempts to entice me into spending more. I just don't need them I can create my own magic in just looking forward to giving to people I love, whether in the form of presents or even better in meals together. The whole thing is an anticipated enchantment.

All this means is, that once it's done I fall so far and so flatly back to earth, it's a wonder it doesn't cause a tsunami! My eldest son going back to London was so painful. After four days of his delightful company it was a lonely house on Wednesday. But I got over it with a lot of effort on my part to change my thinking from being downbeat into moving forward. My thinking is always helped my looking outwards, I do not know what I would do without garden birds to stare at frankly.

So Friday dawned with a need to finally open my self help book and write something, alongside writing letters to potential customers of my emotional wellbeing training. So I felt I'd had a productive day, and given myself a new and unknown future.

Saturday, bizarrely I woke up thinking I had to clean my stove, a very rare thought indeed. But a thought that enabled me to actually do the task, so I could at least claim I clean my cooker every year!!!!. That alongside taking my youngest to the train station with his girlfriend for him to go to London to spend the new year with his bro filled the morning. Then my walking pals demanded I came out for a walk into town and back, which was lovely.

Then I came home and shut the door.... and then it started to get difficult. New Year for me is something to be avoided like the plague, if I'm with others I tend to get very drunk and behave badly. I prefer to spend it on my own. Although if I was really given a choice I'd spend it with someone I love, but that can only happen when there is someone fulfilling that position. One that has now been vacant for  several years.

I got through New Year's Eve, I had it planned, a couple of glasses of real champagne, a beautifully cooked meal and an escapist movie and bed by 10pm. Even  that meant I couldn't sleep and got so fed up, put the light back on till the witching hour to read, turned it off to listen to the fireworks, give greetings to the dog and got to sleep.

But today has been absolutely fucking awful, I have felt so alone. I've texted everyone I can. I can in a while phone up a couple of mates, which will be fine, and there is some fantastic Sherlock Holmes to watch on the box. So I know the evening will be fine.

Getting through the isolation of the day has been tough, I've channel hoped on the radio, too damned cheerful by far. I've listened to CDs, all sodding love songs. I've cooked myself a healthy lunch and had two more glasses of champagne. As soon as here is done I'll take Trix out for a walk in the rain and then although it's early I can start my evening.

I am so lucky not to hook into this frightful alone pain too often. I really feel for people who are lonely long term, it just sucks as an emotion. I am so privileged that I know so much about psychology that even when I'm going through the bad stuff ,I also know it will pass and I will with a bit of effort push the bad stuff right out the door where it belongs.

I feel for all the people who have been and are alone on this 'coupley' time, it's not a good time to be alone. But hey the day has nearly done, and tomorrow like they say, is another day.

So I wish everyone who has experienced feelings of aloneness in a bad way last night and today a big enveloping hug of warmth from one human being to another. Just Valentine's Day to get through now and we'll all be on the home run!!!!!!

Picture is of my birthday with me and my beloved sons around for the day
Posted by Fire Byrd at 15:43

Labels: is it a happy new year

Happy New Year, my far away friend. I'm glad too that you didn't close up the blog. I hate that lonely feeling, and often feel it in the middle of a crowd. Which makes it easier for me to hinker down in my isolation.

One thing I know for sure, if I ever wake up wanting to clean the stove, I've most likely having a nightmare or running a fever.

May the year ahead be full of all your favorite things ... a clean stove, a bottle of champagne, your sons by your side and places to walk.

Wishing you a blessed New Year and hope that you create all the dreams you desire (except, of course, those that are stove-fed. Although... that may mean something heated and passionate....hmmmm)
From one lonely soul to another...(((((hugs))))))
By the way, you are beautiful and your sons are quite handsome. Love the smiles!

s filled your soul with fresh spirit. I am ever so happy that you have not closed your blog. Just have sent a long email. Love you girl and hope we will meet this year!

My beloved Byrd~
I love your words, your wisdom and YOU!
I would be so sad to see you go.
And I am so sad that you are having a lonely day.
I wish I had a magic wand so that I could wave it about and make all your wishes come true.
or mostly wave it so I could pop over there and give you a hug..
and go find you a sterling man to make you smile and get you sweaty...
~lol~
(((HUGS)))

Happy new year Mandy. You should know that no matter how alone and crummy you feel, your posts make a difference in people's lives. Your honesty and authenticity of your posts can serve to help those suffering the same pain. Your humour is refreshing and your personality peeks out from every sentence. I hope 2012 is a good year for you Mandy. Take care!

Just found your blog so don't mind me working my way through your wonderful words. I'm a 2-year breast cancer survivor with two sons of my own - ages 19 and 23.

It's nice to meet you!

Mandy, glad you're still a blogophile! Miss the Beautiful World as a part of daily life but the sense of community remains, of knowing people from afar as friends and sharing their landscapes and fancies. I follow them (and you) on blogs now and post to Richard's new one as it grows slowly into something very special, too. I have great excitement about 2012, not as a Doomsday promise from the Mayans but as an expression of the beginning of a great new cycle of their calendar and a psychic opening for us to enter into the continuing cycle freshly. Health, happiness, and happy photographing in this new year. Gail

My dear Mandy, you know so much, just listen to your own words in your last post, and yet... it is not always easy to relax and smile and think, Oh, this will pass, too, and a happier day will come. BUT IT WILL.
And we are all going through sad times, or loneliness, or fear, just on different occasions or for different reasons. But when we look around us, we see that there are smiling women near us, holding and comforting us. Just lift your eyes! And go to the Blogland café where we can turn up any time of day or night, and let others know how you feel. You see how much response you are getting, heartfelt and sisterly. So lift your glass, and sing a song with us! Many good New Year`s wishes from Usedom!

Wow...you cleaned the stove?! I am so impressed...your more than welcome to come here and clean mine you know...I could even provide some champers as a (bribe) incentive? No..oh!

I'm sorry that you struggle through New Year...it is a tough time of year. I don't have any words of wisdom but I do thank you for sharing what you are going through...I hope it helps you and I know that it help others.

Ps. We would miss you if you left blogworld...I'm glad you decided to stay :-)

(((hugs))) Feeling lonely is horrid, especially during the holidays. I'm glad you wrote about it and made it through.

The picture is fantastic. Your son's are as handsome as you are lovely.

May 2012 bring wonderous, happy things to you!

I hope that 2012 will be a happy new year for you Mandy. There will be challenges, but you've overcome so much in your life already. I'm sad that you felt so lonely. I'm not a big fan of 'New Year' for all sorts of reasons, a lot of hype and anti-climax being amongst them. I think sometimes the perception can be that everyone else is having a good time whereas many are just getting through and some are lonely even when surrounded by people.

Your sons are very handsome young men and you must be proud of them.

On a lighter note at least the stove won't need doing until 2013!

*laughing* If it's any consolation, I vacuumed AND rearranged furniture. All this in the company of a 2 year old.

Different issue for me, New Years Eve/New Years Day--I had the 2 year old and he-who-thinks-I'm-nutz. (might have a point....LOL....I AM menopausal!!) But you can be amongst others and still find yourself 'alone' in thought/feelings, as you well know.

But I know and you know--this'll pass. (pretty much has thanks to my snarky way of dealing with the uckiness)
And each day is a new day. (THANK goodness!!!)

And if you're in need of an oven to clean in the near future--don't look in this direction. LOL It's mineminemine all MINE, I tell ya! ;-)