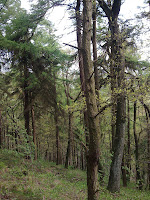 Ancient woodland going back to The Knight's Templer 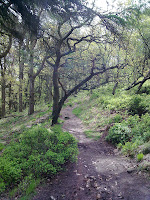 Following the path to Lud's Church 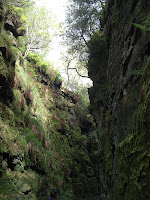 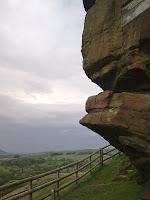 
Stress is simply horrid, it takes so much effort to stop it.
And at the moment it keeps coming round to my door and demanding to be let in.
When it arrives normally it will be a fairly slowly build up to knowing I'm stressed. Right now I go 0 to 60 in a nanosecond. Things that I can normally take in my stride are frightful to deal with. As in breaking a glass dish in the kitchen this morning, I just burst into tears at the awfulness of it (!!!)

This time it all started last Saturday night with Alex puking on the hour every hour through the night up until 6.45am, and then he slept. I took a deep breathe then and got on with the day. He was well enough later, although hadn't had any food to go out and see his girlfriend. I continued to breath.

Monday I went to work, and on my return realised he'd managed some cereal and milk and was out... yes it was going to be okay, the attack had passed....he returned at 4pm had stomach ache, but was hungry, so I cooked him a boiled egg.

Ten minutes later he vomited it back up, and then continued to vomit for the next three hours till I decided, ENOUGH, and took him back to the hospital at 8pm.

I left at midnight, he was on the A&E observation unit with a drip up, still being sick, despite anti-emetics.

Next morning I phoned up he was still on the trolley in the A&E unit.

I went to work.

I explained to all my clients that my phone was on and I would answer it if he, or the hospital rang. This is not approved counselling practise, but I don't give a fuck. I was only at work cause I'm self employed, and I've lost a lot of money so far this year with his illness. He didn't need me there, but he might have done, and I was going to be doing what my son needed.

Fortunately I managed to get home at 2.30, feed the dog, changed my clothes, left the house and went to the hospital. Leaving the dog with the backdoor open until one of Al's mates was coming round at 5pm to walk Trix. I just hoped she would be ok, and not try and do something stupid like jump the side gate.

Got to the hospital at 3.30 visiting time. He was still on a trolley. They were trying to find him a bed. We talked in a desultory fashion, he was still so ill. We asked for more anti-emetics it took FIFTY minutes to give him the injection. He wasn't waiting for a prescribed length of time, he'd had none since the night before.

Eventually at 7.30 the ambulance arrived to take him to the other hospital in the city. He was given a side room. We both breathed a sigh of relief at this, at least he could get some sleep now.

I came home, starving and incapable of cooking any food, and was going to stop off to buy some chips (fries), but ended up phoning my sister and demanding she make me some toast.

Outside of my sons ,I only have my sister and her two children in my family. And although we are close I generally don't worry her with my stuff. But I couldn't go on last night without a familiar hug and some personal support.

It has been unbelievably stressful dealing with this on my own. Don't get me wrong, my friends have been wonderful, but there is only so much anyone else can do when they are miles away from me. And they cannot make decisions about what I should do. Not that my sister or my eldest son can do either.

It's all my judgement call. I've researched what I think is wrong with him. I've tried to tell the A&E staff. What is happening to him is outside the range and current experience of the NHS staff. So I'm carrying this burden and it's heavy. The people around me know what Alex and I think is happening to him, but the NHS has to catch up.

So this afternoon the reason I'm home and here, is that he is having a gastroscopy (camera down his throat looking at this stomach) and this evening is being visited by his girlfriend. So I'm not needed.

And boy, do I need not to be needed right now. So since coming back from my Wednesday walk with friends, I lay in the bath for an hour, went to bed for another, ate some food I found in the fridge, which required no effort on my part except turning the oven on. And now I'm here, and I can get on with my normal evening stuff of dog feeding and walking soon. With no need to rush off anywhere at all.

With no doubt more things to deal with anytime soon. But I've had a moments respite and that has helped immeasurably.
Posted by Fire Byrd at 15:24

My gosh, poor Alex, poor you, my heart's going out to you.

Would love to meet you BTW, which weekend are you here? I'm away for some of the long weekend but think we'll be back sometime on Sunday 24th. This coming Sunday though I'm free and all yours if that's the one?

Well thank goodness you've had some respite, hope it's enough to charge the batteries up at least a little.

More strength to you throughout all this, and if you need to give me a shout..

Oh, so sorry to hear about your boy getting sick again; hopefully being helped and diagnosed correctly and promptly. Don't forget to eat.

How awful that it`s coming back, and you alone, and the doctors not much help, and Trix waiting for a walk - sometimes it all does get to be too much. I feel so much with you, dear friend. Is there anything I can do for you? Shall I send you a home-cooked meal? A doctor? I wish I could send you a good hospital. You both get better soon! Love from Angela

Hope you start to get to the bottom of what is going on with Alex, no wonder you are stressed hun....my heart goes out to you at this stressful time...(((hugs))) xx

all the hugs you can manage

Oh no! Poor Alex, poor you. I'm really sorry to hear it's all started up again. Hope you get to the bottom of this asap. Lots love & hugs BG x

You both have to lay back for a bit and let everything slow down before you can tackle what needs to be dealt with.
He is in good hands and you have to recharge your batteries too.

I'm sorry to hear that Alex is still sick. Starting to understand why so many American's don't think socalized/nationalized medicine is a good idea. I hope they find out his problem soon - for both your sakes!

My goodness, with all that going on, no wonder you are stressed. Glad to hear you've had some respite. Hope the scope will tell the story and both you and Alex can get on with the healing process.

For what it's worth, I'm sending good vibrations, prayers, hugs and a big red balloon.

Rest when you can.
M

This is so sad. I hope they can determine what is wrong with Alex & fix it. Both of you have been through so much grief. Hugs to you. Rest & let Trixie snuggle with you & offer her warm "hugs" & "kisses".

Oh dear, no wonder you are stressed. I do hope they find out soon what is wrong and can start to treat whatever it is.
It is so hard being on your own at times like this, I know. Sending lots of positive thoughts to you and hoping all will be well soon.
xx

Mandy I wrote quite a lot back to you which could be summed up in three words bsdivslly,when I look back on it ie. "hang in there", but had trouble posting it for some reason. Hope you don't get a long message repeated four times!! Anyway -you're doing great -hope Alex gets better soon. The whole process must be very difficult at the moment.xxx.

Rest a bit.
Do what you need to do.
Remember folks are praying for you and for the kiddo.