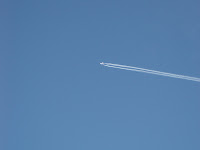 My youngest son passed his driving test last Tuesday. And he's packed in all bad substances in favour of buying petrol! He's also realised that having a clear head is a much easier way to get girls interested, having a car also helps I guess!

My eldest son got a job today working for the Government, it's a three year contract with a qualification they expect him to study for. His salary will be larger than mine!

I get visited on Friday by the dog rescue people to see if they think youngest and I will be ok with one of their dogs. If so then we may have one as quick as a couple of weeks.

I already have two part time jobs and I negotiated myself another one today, to work as a specialist advisor on a year long project, and I've negotiated London rates in payment, despite living the other end of the country.

So all in all a pretty upbeat start to the year!

All of which means no doubt more American trips for me! And a holiday for the lads in Amsterdam to celebrate youngest's 18th in March

Plus weirdly I've just had one of those emails telling you how loved you are and saying send it on to a number of people, it was nine, but I had 17 lovely women on that contacts list. If I did this then in 9 minutes I would get something nice happen to me. Well I sent it on cause I liked the message to my girlfriends. And what do your know I've just had a surprise email form someone who had and still does have an impact in my life, telling me amongst other things that I still look good!

Oh world stroke me some more it feels great!
Posted by Fire Byrd at 20:11

Excellent news all round Byrd, a truly magical start to the year...so pleased for you all..xx

Congratulations to all of you! This will be your best year ever!

Nice Nice Nice! Good work and good news for all of you! A definite great and upbeat start to this year.. Congrats!

Check this out! re·[frac]·tion Chocolate!

Also - come on over and check out my new blog endeavor -
humanus augmentis It is a new blog for tech-gadget fans and the like... and as always.. see you back over at
con·tin·u·um. You Can follow here. See You On The Next Post!!

Your opening line was very funny Fire Byrd! Good start to the year, may it long continue. I always enjoy your visits and comments - may they continue too, and here's wishing for a great year for all of us!!

But besides that, this is great! What's been on my mind for much of the day is all the shop closures and how so many people are struggling - or if they aren't now, they will be soon (there was a piece in today's Guardian about Derby, which apparently is feeling the effects of all this pretty badly).

So how refreshing to read just how right things are going with you and yours!

(word verification is "chilyare" which, if you pronounce it a certain way, it definitely is!)

yay you and congrats to your youngest and eldest xx

fantastic - wonderful to hear some good news! its your turn this year :-)

Excellent, fantastic, YIPEE!!! For you and your kids. :D

Oh girl, don't you love it when the Universe is in your zone!

Great news all around!

Great stuff.
Looks like the New Year is looking bright for everyone in the family including the new pet.

yay! so deserved by all of you, yes it sounds as though 2009 will be wonderful !
Xx

great news I am so very pleased for all of you.

now pass some of the karma this way please

This gives me hope for my year!

great news! that driver's licence hurdle is always a big one. we still have one to go...

and lots of future income for more holidays for the flyaway Byrd!

You deserve good fortune. You earned it. Simple as that, FB.

Ooooh you guys! you really are all so lovely, and I'm so glad I have you in my life.
so hugs and kisses all round
xxxxxxxxxxxxxxxxxxx