UPDATE ON TRIX AND THEN NO MORE DOG POSTS!! 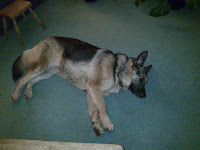 Update on Trixie..... after which I promise not to continue doing dog posts!

I don't know how we've done it but the three of us have landed on our feet.
Within hours of being here, Trix was licking my nose. Now I don't like dogs licking my face, but this seemed important as a right of passage.

She then lay on the floor and let me stroke under her chin, so exposing her throat.
I was gob smacked at the level of trust she was putting in me so soon.

On Sunday both Al and I took her for a walk by ourselves. He did it first, as he is stronger and less likely to be a push over. She was fine just on the lead. So later on in the dark I took her, and although she pulled a bit, it was nothing as bad as I had feared.

Since then she has settled down as if she has been here for ever. There are obviously different anxiety points.... leaving her alone for the first time. Al did it today for 20 minutes and I will do it tomorrow for a couple of hours to go walking. I won't be taking her with me, as my two friends are a bit dog anxious and I haven't totally got her measure yet.

Introducing her to other people, Al had two mates round today, one she barked at and tried to nip and the other she was fine with. Then she got it together and ended up sitting on the bad guys feet! My first guest will be my sister on Thursday. Now I know she is already protective of us, and she should be easier with Al's mates as he can look after himself. So I'm a bit anxious, but then she was fine when I met her for the first time, so hopefully it will go well.

She is limping at the moment, we were assured that it was related to a play incident before she came. It was worse yesterday after a day of high activity, and not so bad today after restricted walks and no playing in the garden. I don't want to take her to the vets for her dog MOT until I know she feels totally safe with me. Plus I want to take out insurance and don't need it on her record she has dodgy hips.

We, Al and me, both agreed though, that if it is worst case scenario and she does have hip problems, it's too late to send her back, cause we both love her....
Posted by Fire Byrd at 18:33

Labels: the world's best alsation is living in our house

That`s right. Once she licked your face you can`t pretend you didn`t love her, too. Dogs are just such honest and trusting beings - I told Paco today that I was feeling sick and had to lie down, and he understood and lay down at the sofa (me watching inauguration, of course). And of course I had to take him on his walk, but that is MY duty. No exception. And it did me good, too!

So glad to hear it!

dogs are wonderful creatures, I love the updates on Trix! :-)

Love puppy stories. We have a Maltese, Charlie, and we have lost total control, he rules. We need the Dog Whisperer.He is smart, he learns some things so fast...his hang up is discipline....he bounces around when people come, he loves playing "you can't catch me, when we are ready to put him in his crate and leave him. Life is never dull.

She must feel at home to be so close to you so quickly.
Animals can sense when they are safe and loved

I love Trixie already, if you need a dogsitter then please shout...lol

I'm happy to hear all is going well. I'll look forward to updates as she is a beauty and I love dogs!

and i can't wait to meet your gorgeous doggie!

oky i have cathced up with your posts and know that al is alex, soz for not reading your old posts before x

I never commented on your new pup, Trix. I had a beloved German Shepherd, Mutz, for 13 years. They are the most loyal, loving and amazing breed. How wonderful of you to adopt. What a pleasure you have ahead.

Guess I won't be the only one saying... Dog Posts? Why not? Is there a rule that limits Dog Posts? I want to hear more about Ms.Trix! Actually, I like all your posts... I sneak over now and then, pretty often! And I love Trix already!